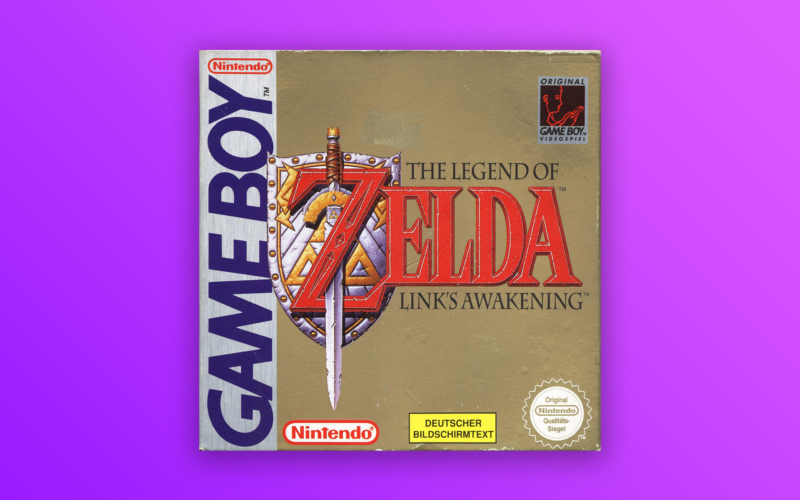 The Legend of Zelda is undoubtedly one of the most iconic video game franchises in history, with an equally iconic collection of music.

From the mesmerizing arpeggios of the Great Fairy Fountains to the enigmatic melody of Saria’s song, The Legend of Zelda is filled with tunes that are adored on a universal level. The single piece of music that stands at the forefront of these works is legendary composer Koji Kondo’s overworld theme, which also serves as the main theme of the overall series. The piece perfectly captures the thrill of being a hero on a grand adventure that’s full of both awe-inspiring discoveries and formidable foes.

In this article, let’s explore how Kondo’s timeless main theme uses harmony to convey the wide array of emotions associated with adventure. Below, we’ve transcribed the melody and some basic block chords using both sheet music and MIDI (download the MIDI file here): 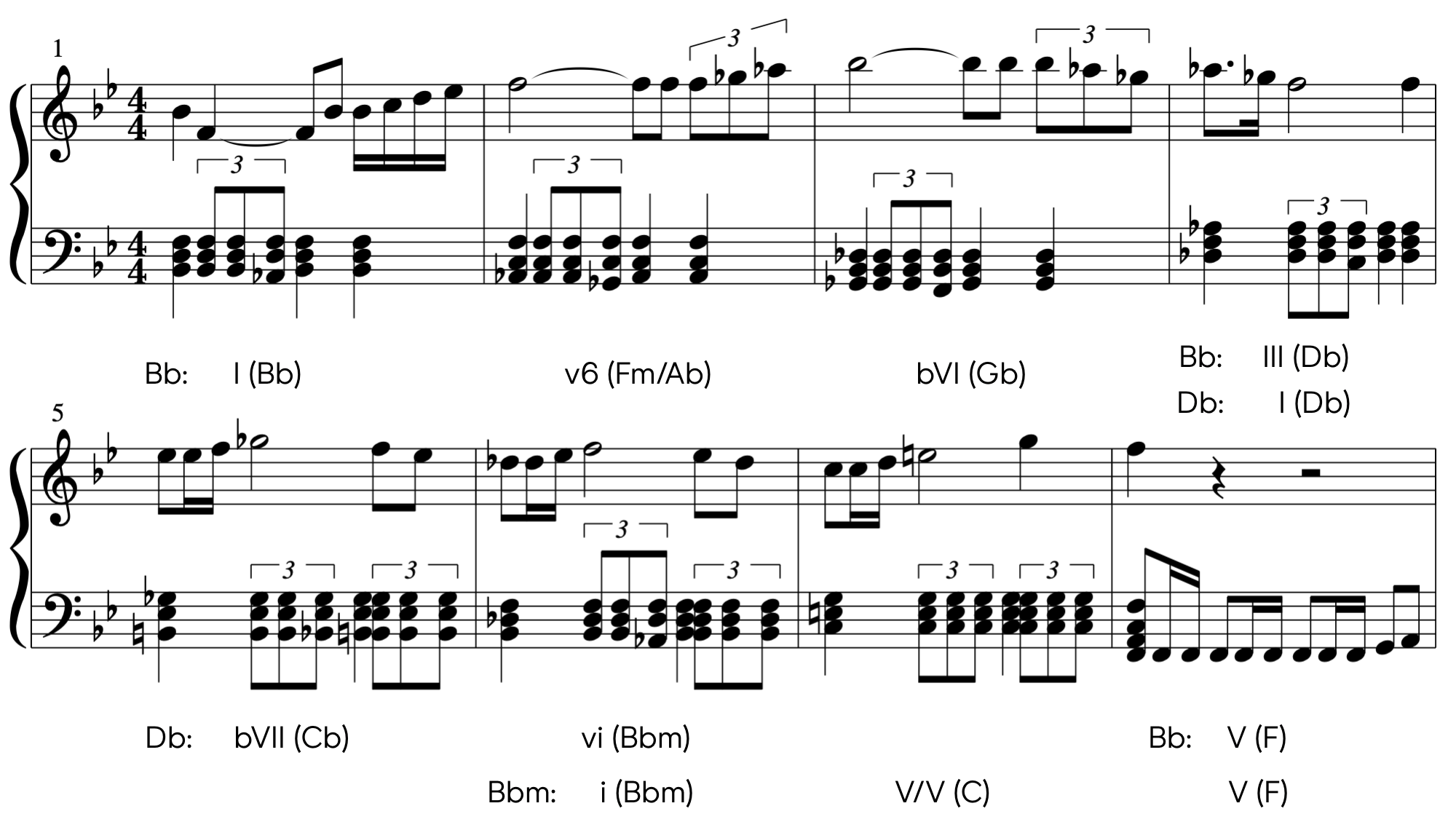 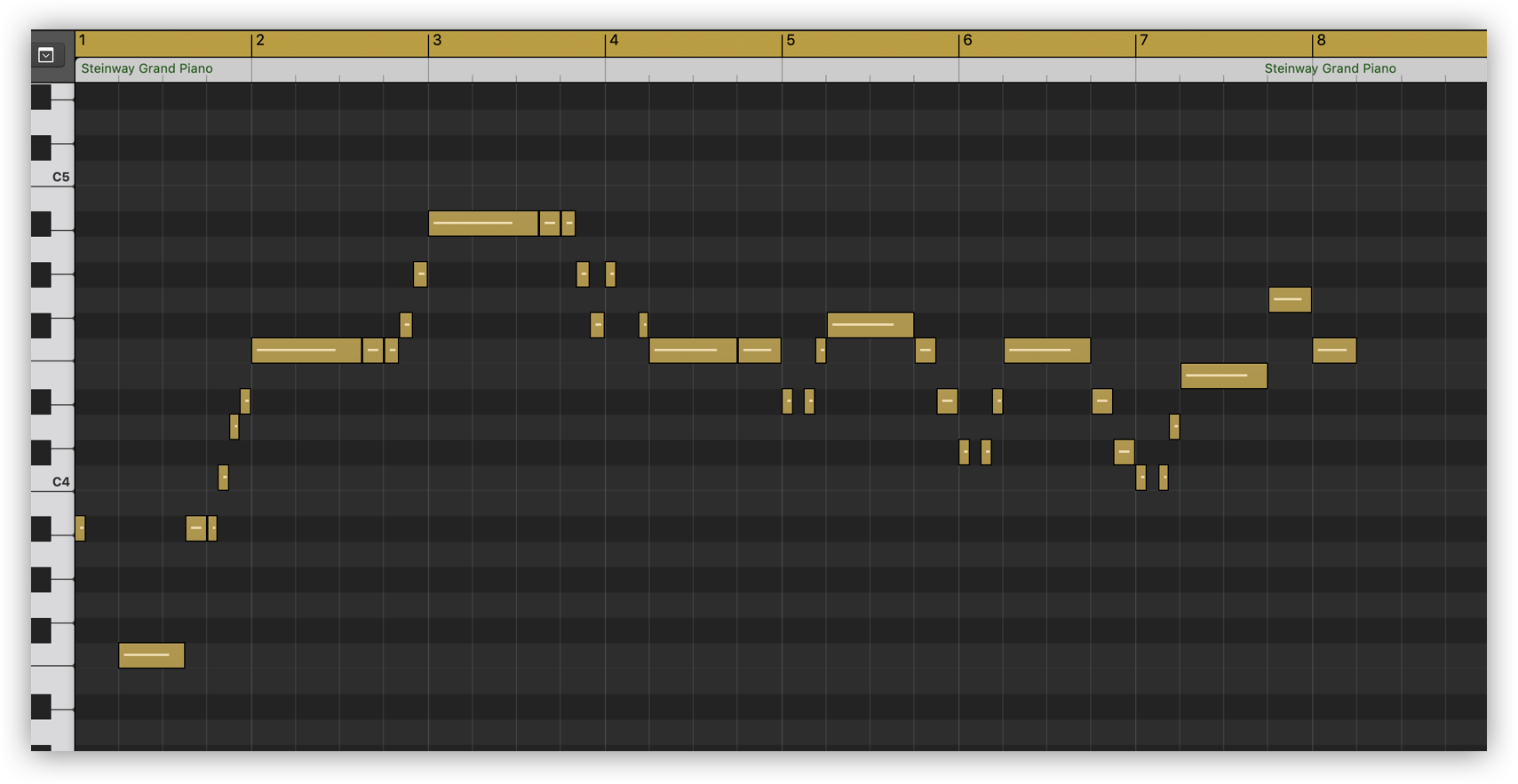 The melody of The Legend of Zelda‘s overworld theme 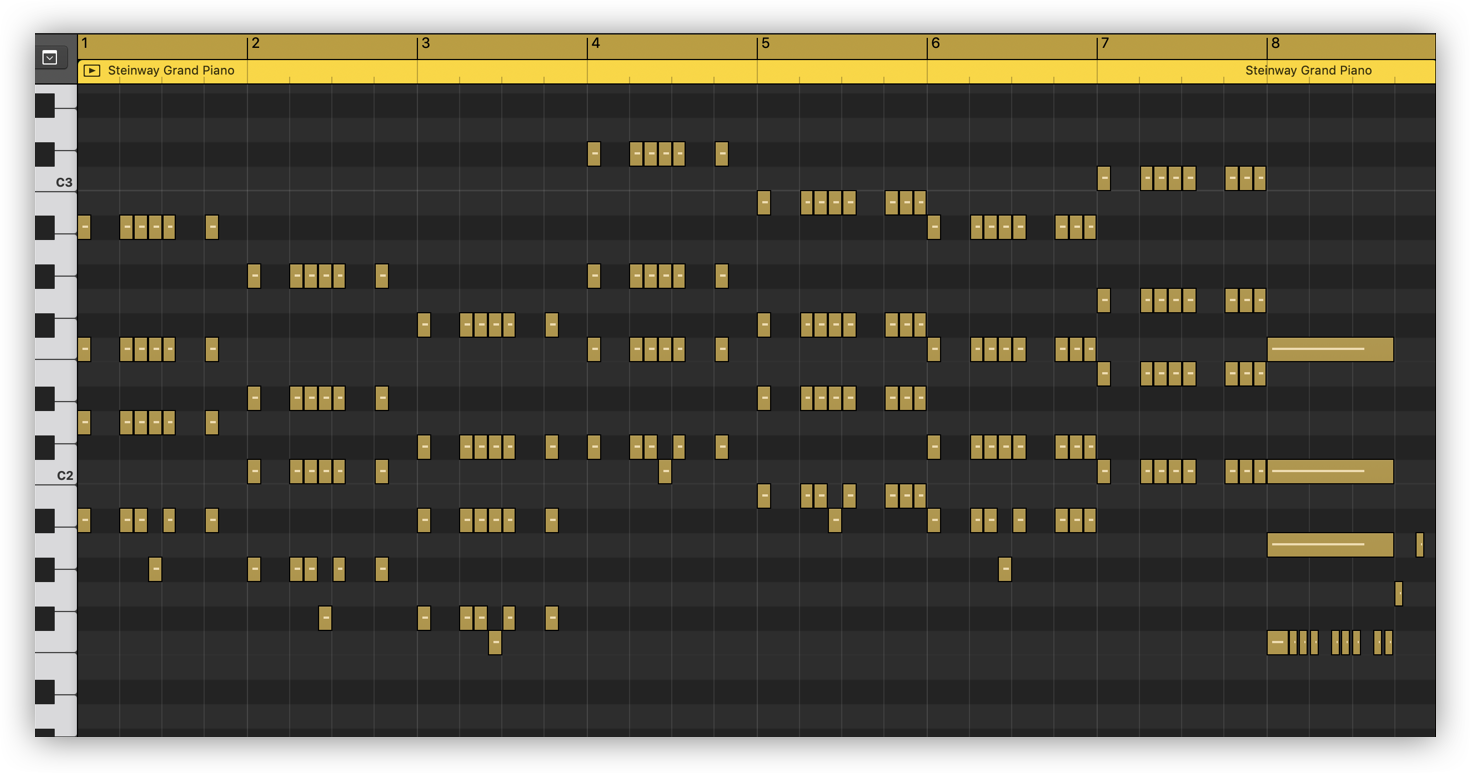 The harmony of The Legend of Zelda‘s overworld theme

Take a listen to the transcription here:

Throughout the years, the theme has experienced numerous musical variations from game to game. For example, the theme in the original Link’s Awakening does away with all triplets and features a playful call-and-response. That said, for our purposes, we transcribed the piece in what most people would probably consider to be its most popular form. We’re also focusing specifically on the first eight bars of the main melody, omitting the intro and the second section.

The harmonic rhythm of the overworld theme is very consistent; the composition changes chords exactly once every measure. Let’s analyze the chords one-by-one to understand (1) how they work in the context of the progression, and (2) how they communicate emotional themes associated with adventure such as heroism, and danger, and exploration.

The theme starts off with a proud Bb major triad. There’s not too much we can say just yet because we have no other chords to contextualize it in. However, it’s worth noting that this Bb major chord will serve as the home that we return to in our harmonic journey. 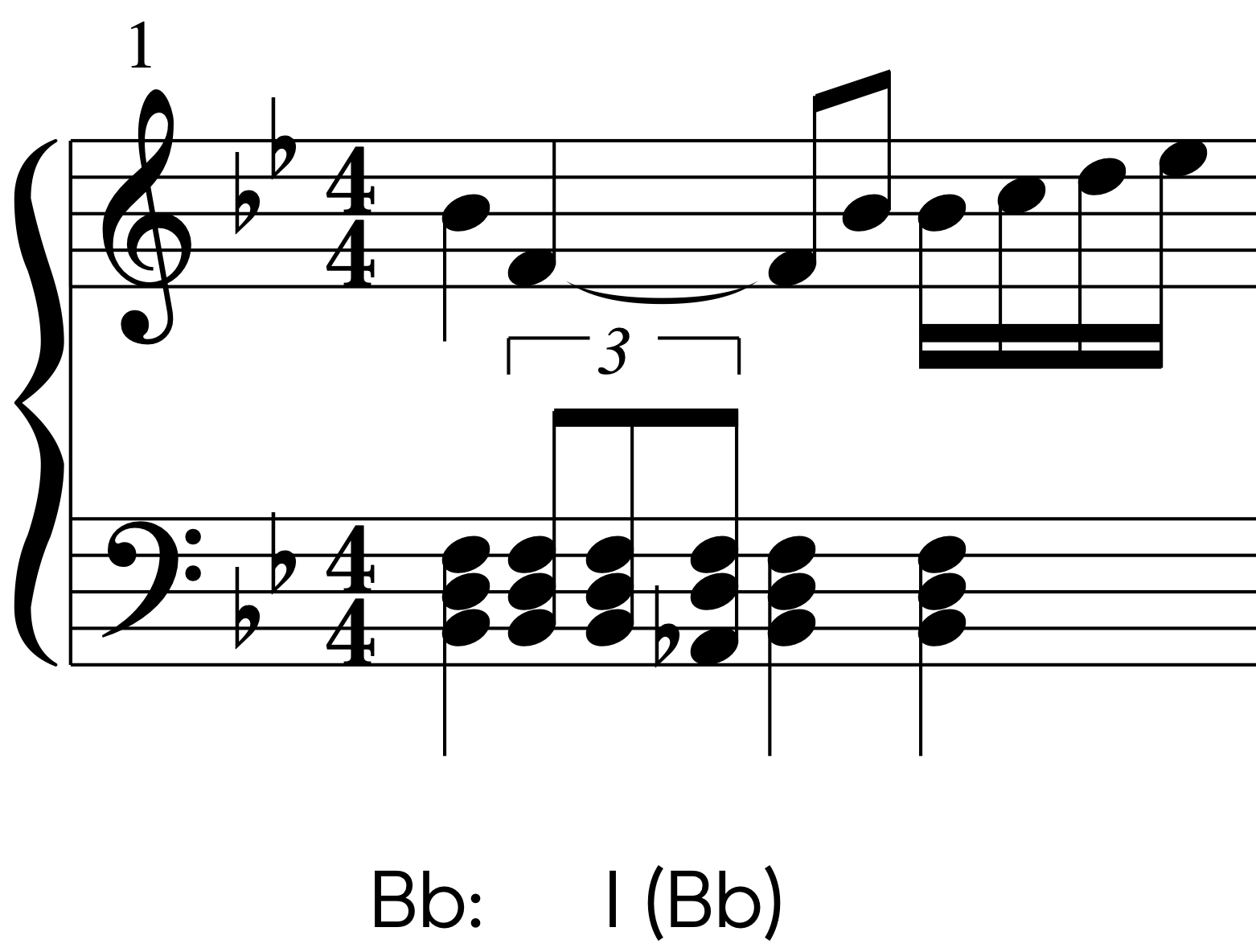 Having a major harmonic ‘home’ effectively sets the tone for the greater franchise. Unlike some other RPGs with brooding, minor themes, at their core Zelda games tend to focus on the hero rather than the enemy. You’re likely to spend just as much time (or perhaps in the case of titles like Breath of the Wild, way more time) taking on side quests, running errands, and exploring villages as you are beating dungeons and fighting Ganon. For this reason, the major chord and accompanying soaring melody make perfect sense as the overworld theme’s opening statement and larger musical focal point.

The first measure suggests we’re in the key of Bb major, but the second measure immediately takes us by surprise with a v6 chord (Fm/Ab). In Bb major, the V chord typically includes an A natural rather than an Ab, and its quality is major rather than minor. Then where does this v6 chord come from? There are two logical interpretations that come to mind: it could be a reference to the mode of Bb mixolydian, or a borrowed chord from the parallel key of Bb minor. Looking ahead to some of the upcoming chords, the latter interpretation seems to make a little more sense. 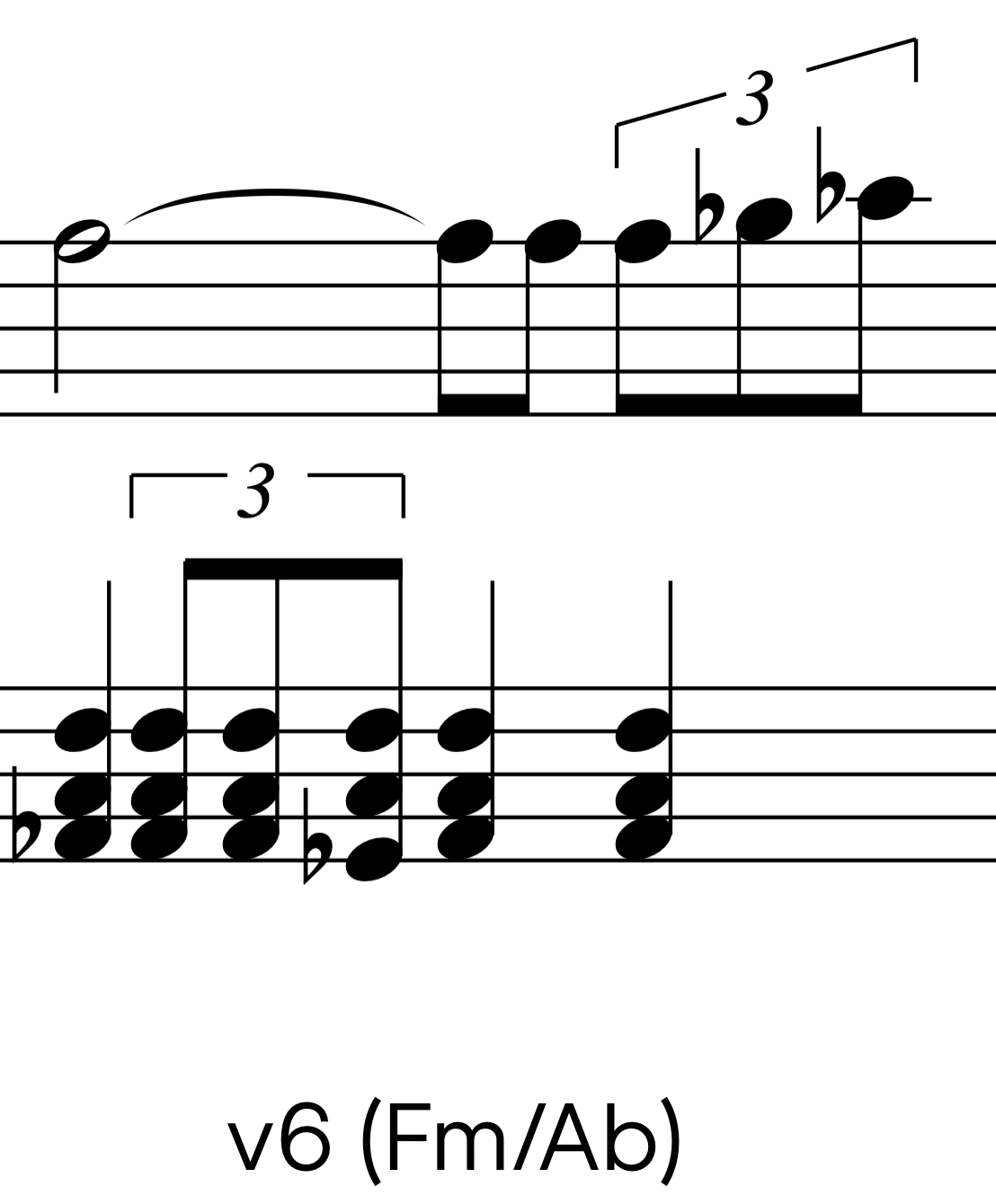 While the emphatic major chord of the previous measure provided an unswerving feeling of heroism, the use of the flat seventh scale degree (Ab) in this chord introduces a bit of darkness to the theme, reminding us that there’s a degree of danger in our adventure. This scale degree is very commonly borrowed in major keys to convey a blend of optimism and danger – for example, the title and gym themes in the Pokémon franchise are founded on the oscillation between a I chord and a bVII chord (Zelda’s v6 chord performs essentially the same function as a bVII chord due to their two shared notes, one of which is the bass).

This measure continues in the same vein as the previous bar, borrowing the bVI chord from our parallel minor key. It also establishes a pattern of moving the bass note downwards by a whole step from chord to chord, an idea that’ll recur again in a few measures. 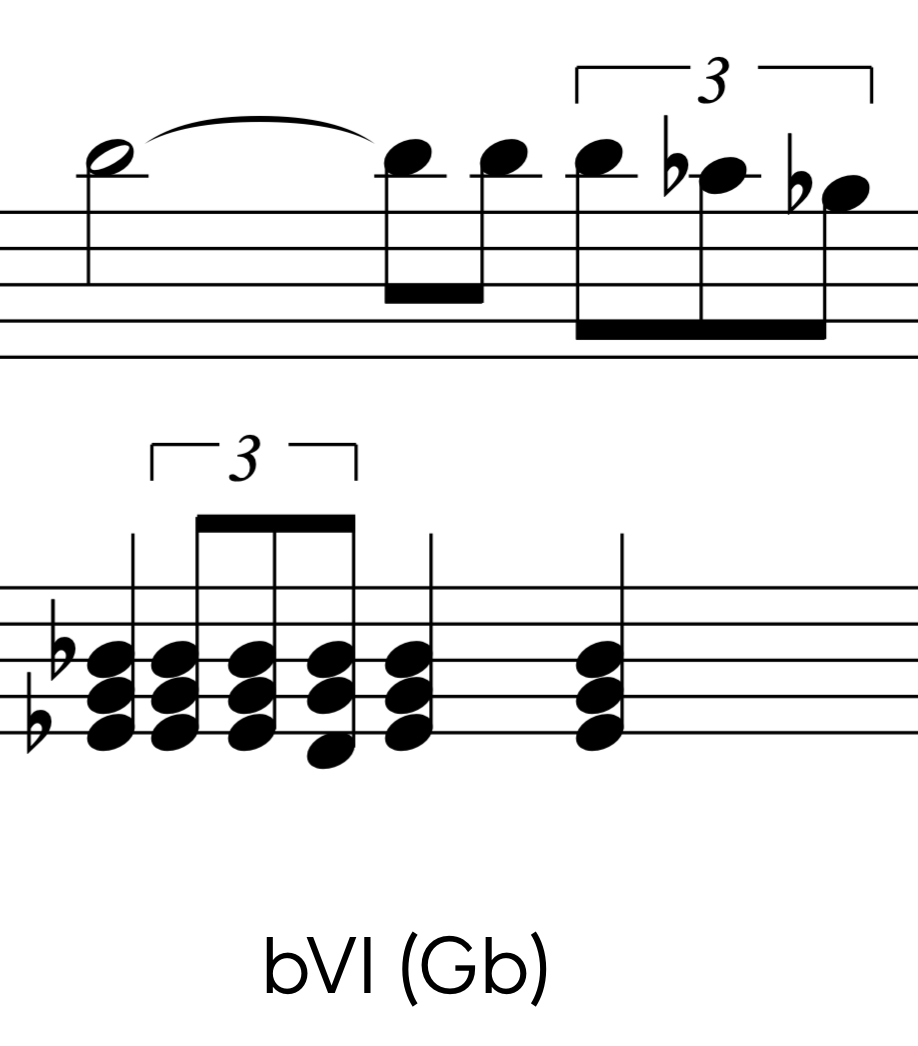 Given what we’ve heard so far, we might expect to continue a descent down to a V chord. A pivot back upwards towards a v6 or bVII also seems reasonable. But of course, we’ll be doing neither of these; eager to keep us on our toes, Kondo hits us with another surprise in the next measure.

The following measure jumps to a bold Db triad, taking us far away from our original key of Bb major. It makes most sense to interpret this as the I chord of Db major, considering the preceding two chords (Fm and Db) also belong in the key. That said, it feels more like a temporary tonicization rather than a full-on modulation, since there’s no formal cadence or clear declaration of this new key (hence the unchanging key signature in the sheet notation). However, we’re officially distant enough from Bb major that it makes sense to begin looking at the function of the upcoming chords in the context of Db major. 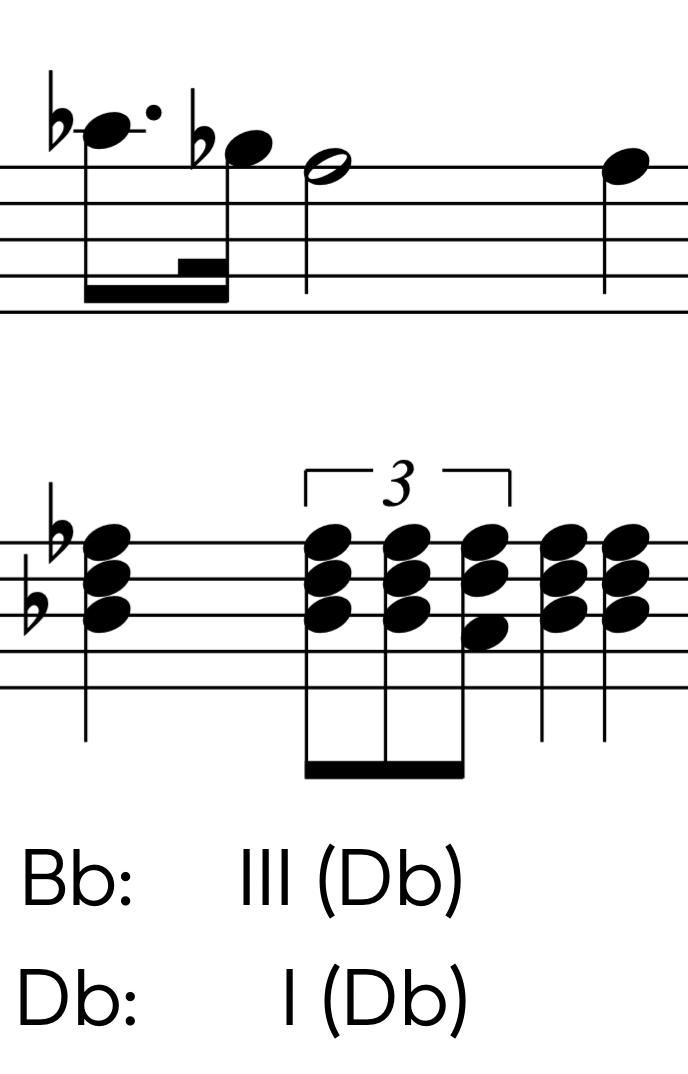 These chords really feel like a musical representation of Link exploring distant lands. The heavy use of borrowed chords introduces unfamiliar harmonic colors that help convey the feeling of journeying, despite the brevity of the piece.

Speaking of unfamiliar harmonic colors, the following measure brings us a dark Cb major chord. At first glance, this chord might not make any sense in the context of Db major. However, if we take a step back and look at the big picture, we see that the chord functions very similarly to the v6 chord of the second measure; it’s another chord built on a whole-step descent in the bass. 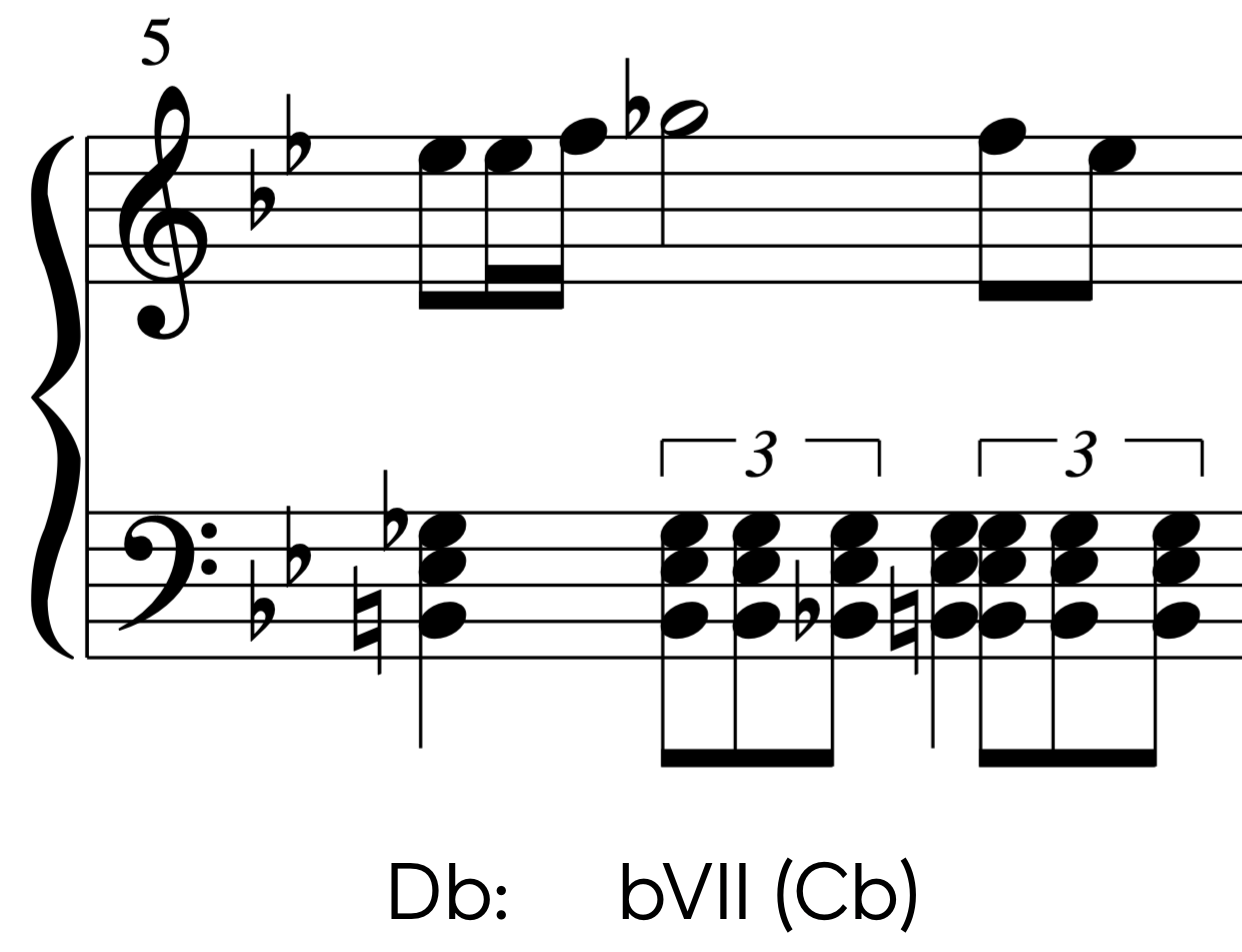 Kondo’s creative use of this pattern allows him to insert unconventional harmonies that are fresh and exciting, without feeling inaccessible.

Our next chord is a moody Bbm chord. As the relative minor of Db, this chord brings us back to a more logical place after the previous measure’s unexpected Cb chord. Although it’ll only be for a moment, treating Bb minor as our current key will help us make sense of our imminent transition back to our home of Bb major (the boundary between relative major and minor keys is practically imperceptible in modern music, anyways). 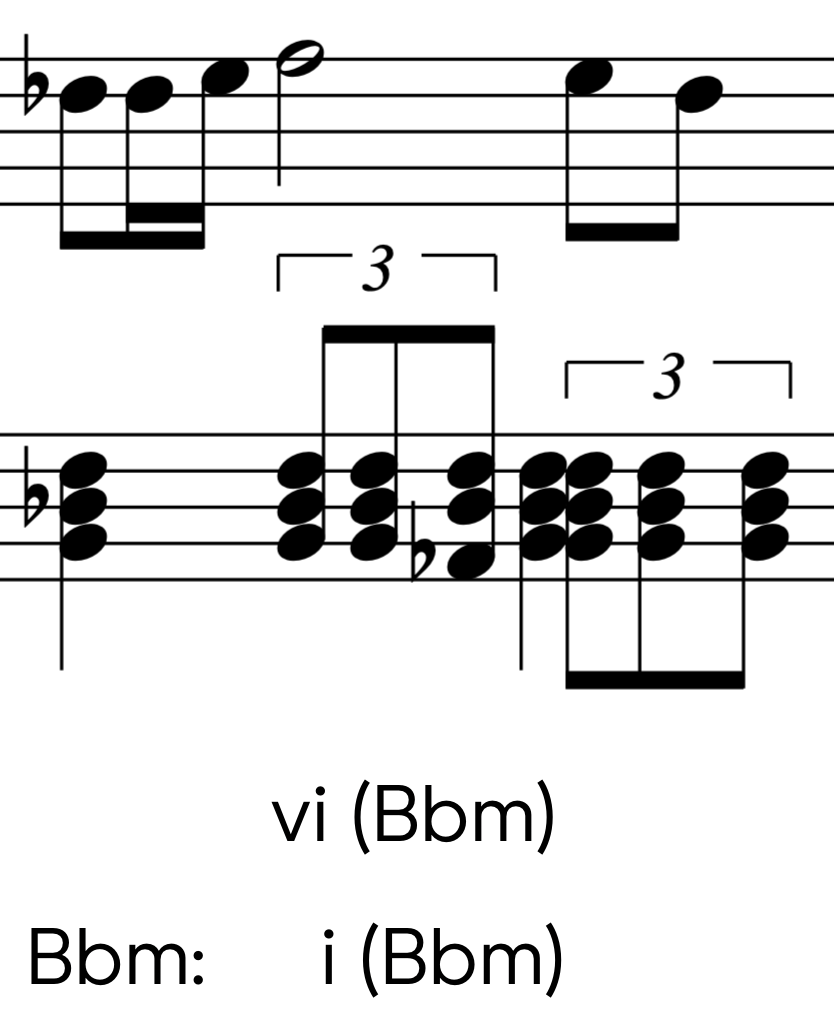 This moment in the theme can really be thought of as the height of peril in Link’s adventure – the melody has been descending for a few measures now, and the chords have been getting darker and darker. But don’t worry – heroism will prevail in the end. The next two chords bring the chord progression to a satisfying conclusion by leading us back towards our home of Bb major.

This chord stands out for how much brighter it sounds in comparison to the chords we’ve been hearing, and there’s a clear reason for this. It’s a major chord, and naturally we tend to perceive major and augmented chords as brighter than minor and diminished chords. However, that’s not all there is to it. Traditionally, a C chord would be diminished in Bbm. The combination of the major quality and our expectation to hear something much darker in its place makes this chord feel especially bright. 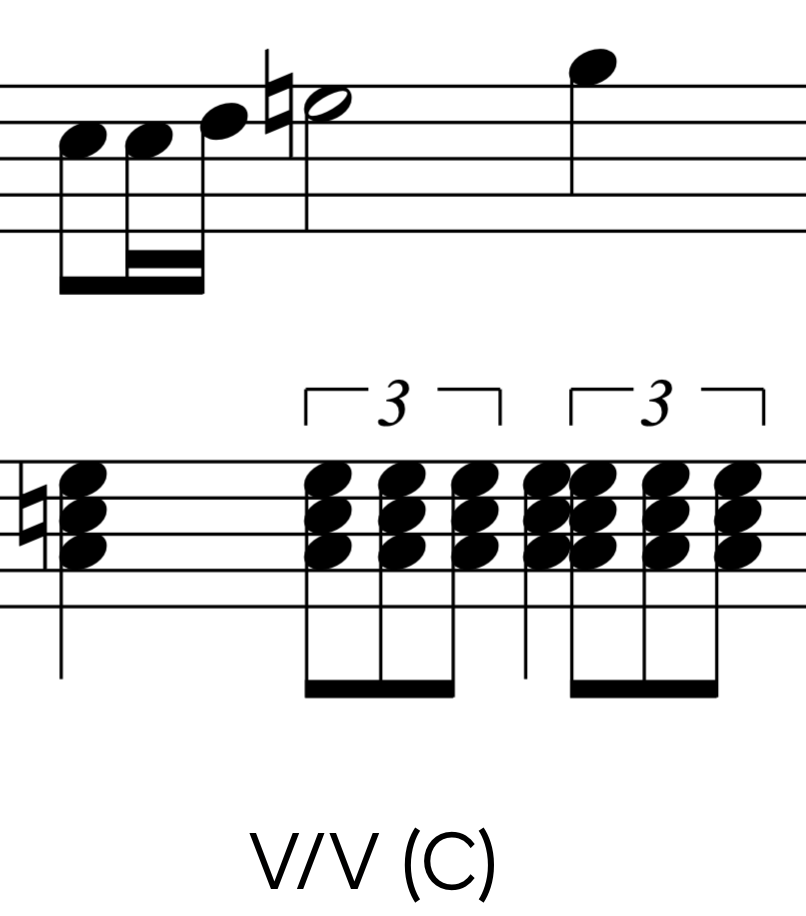 Functionally, this chord serves as the secondary dominant chord to F, which it’ll resolve to in our next and final measure. Emotionally, it feels like a triumphant turnaround – as we kept adding more and more flats in the melody and harmony, it felt as though Link was being backed into a corner by an enemy. This measure is the first one that raises a previously flattened note to become natural, giving the feeling of Link striking back against danger.

We wrap up our journey with a proud and dominant F major chord that seamlessly leads us back to the key of Bb major. At this point, it feels like Link has officially emerged victorious – the lively rhythms help add to the optimistic spirit, and we make our return home from our eight-bar adventure. 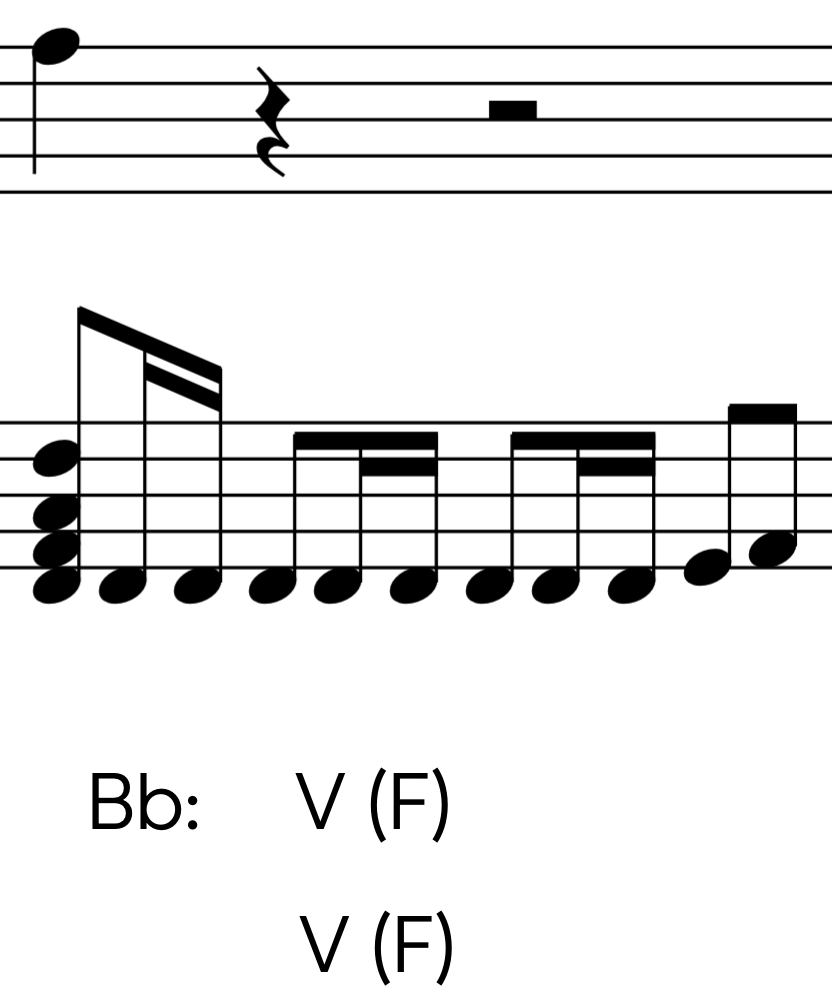 Koji Kondo’s overworld theme is remarkable for how many different emotions it condenses into such a small amount of musical material. What’s more, he manages to do this without making the theme feel cluttered or illogical. The latest arrangement in Link’s Awakening is pretty awesome, playfully combining live instruments with nostalgic 8-bit patterns. It’s used as the score in the official trailer – be sure to give it a listen:

Are there any music theory topics mentioned in this post that you’d like us to explore further? Do you have your own analyses regarding the Zelda theme? Let us know in the comments below, and if you’re looking for more on the music of The Legend of Zelda, watch Louie Lastic break down and flip the Great Fairy Fountain theme here.