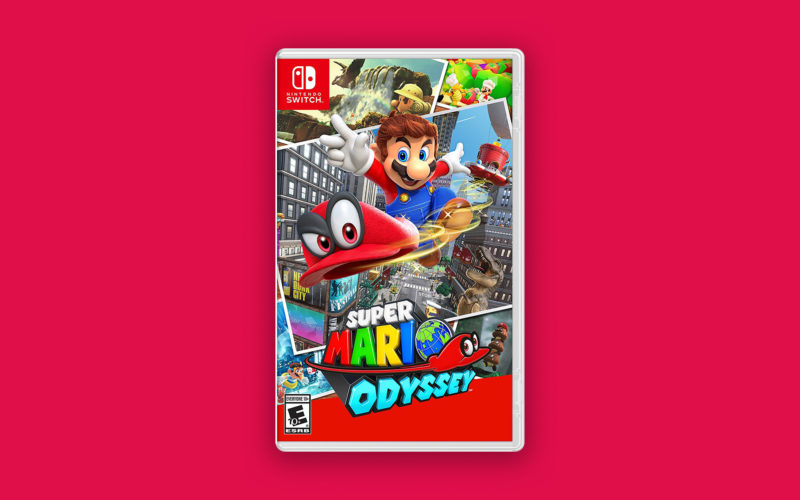 This really doesn’t come as much of a surprise – the visuals are breathtaking, the gameplay is endearing, and of course, the music is delightful as it often is in Mario titles. One piece in particular that stands out from the rest is the game’s theme music, “Jump Up, Super Star!” The song is in a big band jazz arrangement, which wasn’t particularly new to Mario; what was fresh, however, is the inclusion of lyrics, with the piece placing charming vocals by the (perhaps forgotten) damsel-in-distress Pauline, voiced by Kate Higgins, front and center.

One element that’s crucial to this song’s inexplicably jazzy energy is its walking bassline. A walking bassline is defined by a consistent (or nearly consistent) one-note-per-beat figure. Its pairing with an often heavily syncopated melody creates a groovy contrast that screams jazz.

To celebrate the three-year anniversary of Super Mario Odyssey‘s release, let’s take a look at four elements in the bassline in the chorus of “Jump Up, Super Star!” to learn how we might begin writing the foundation to our own jazz tune. A transcription and harmonic analysis are below in score notation, as well as MIDI for less sheet music-minded people – the colors and arrows highlight certain compositional techniques that’ll be explained throughout this post. Download the project here to listen to and experiment directly with the transcription yourself. 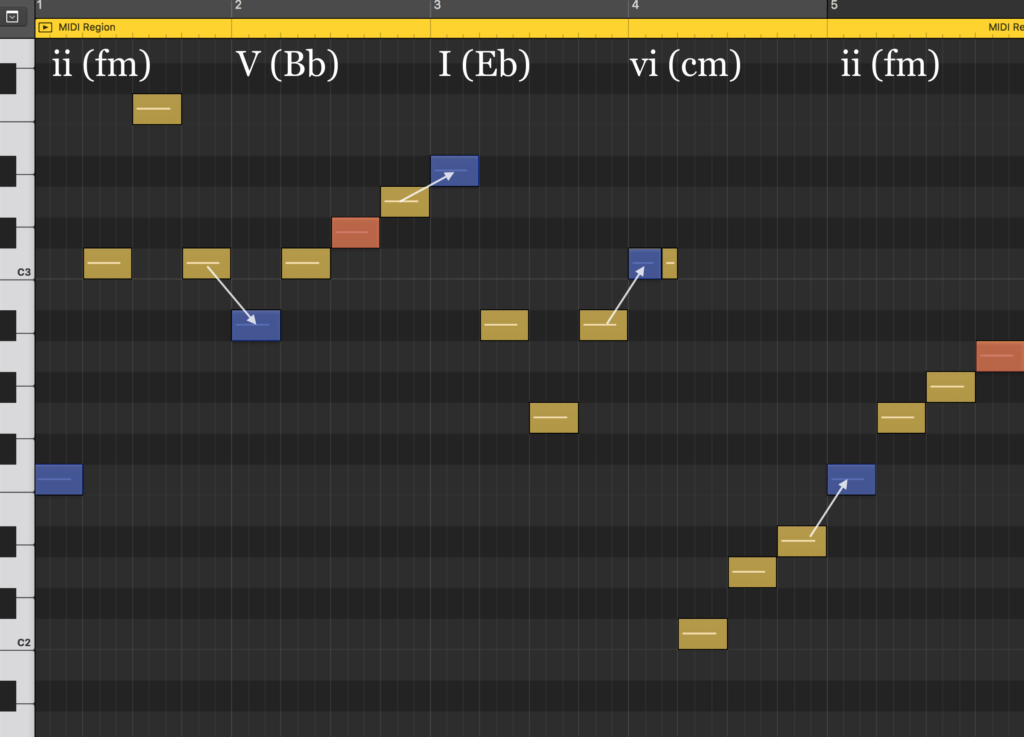 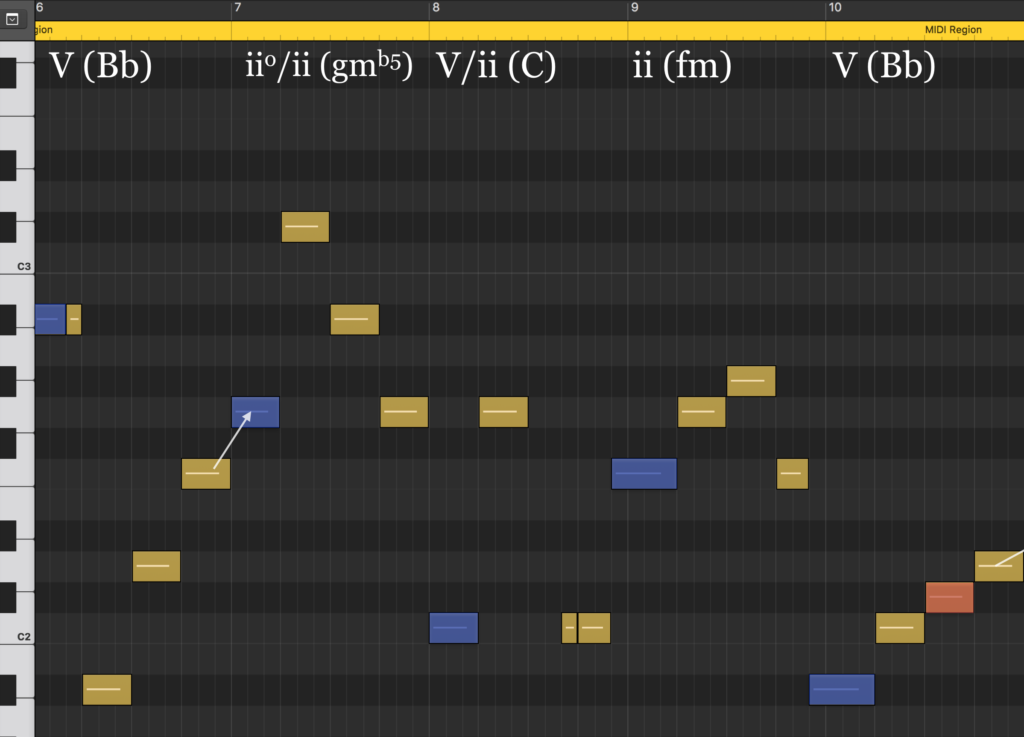 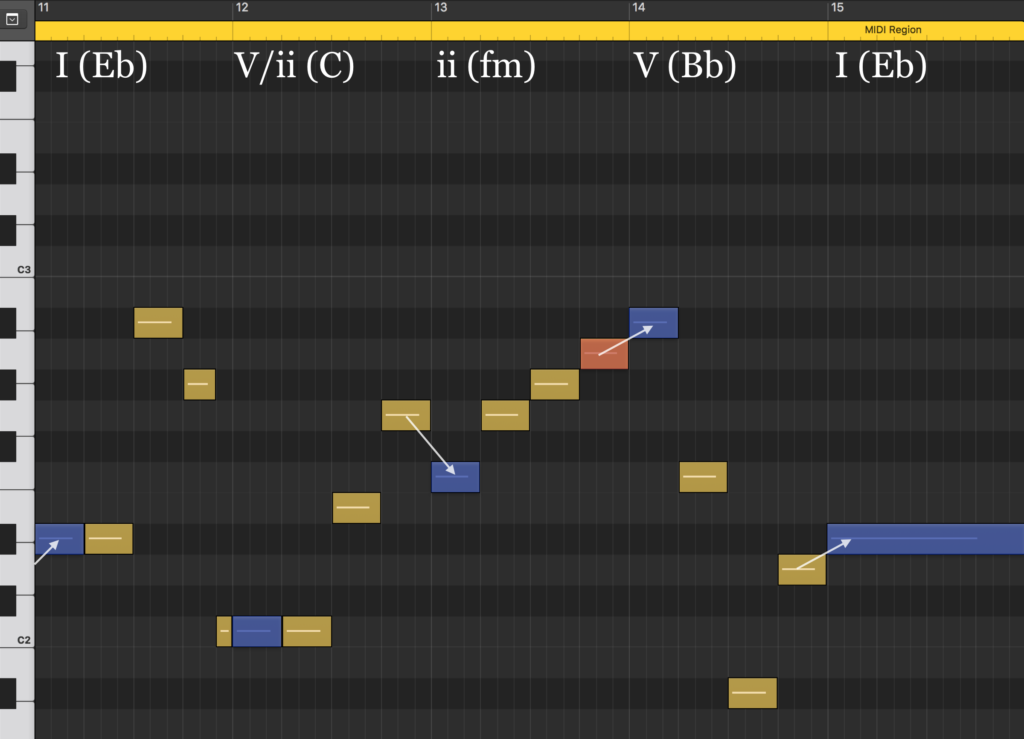 2. Grounded in the root

The blue color in the notation indicates whether the bassline lands on the current chord’s root note at the downbeat of each measure. Interestingly, we find that the bassline is playing the root note at every single downbeat without fail. This is a very common practice in walking basslines, since it not only creates a trajectory for the bassline to head towards but also underpins the harmony, which is an element that’s often showcased in jazz.

3. Smooth approaches to the downbeat

Although we’re sticking to root notes on the downbeats, that doesn’t mean we’re jumping around drastically from one root to the next. The white arrows in the notation are drawn if the downbeat we discussed above is approached either by stepwise or chromatic motion. In other words, we’re looking at whether the downbeat is preceded by a note that’s right nearby it. We find that the bassline adheres to this meticulously during the first half of the progression, and then starts jumping around a bit before returning to the pattern again at the end of the excerpt. In general, stepwise and chromatic motion to the downbeat is a popular practice in walking basslines, since it helps establish a sense of flow among at times distant chord relationships. That said, the leaps included in “Jump Up, Super Star!” are a welcome curveball that change things up not only melodically but also rhythmically – the leaps are all anticipated on an offbeat before the downbeat.

We mentioned chromatic motion in our discussion of approaching the downbeat. If you’re unfamiliar with the term, chromaticism is the idea of using notes that don’t belong in our key (Eb major). Chromaticism is a compositional technique seen all over Mario music and a lot of video game music at large – old Pokémon battle music, for example, is packed with chromatic runs. It’s an extremely versatile technique that can sound playful, eerie, mystical, or even jazzy, as in the case of this bassline. The pitches highlighted in red are chromatic passing tones, which means they’re notes that the bassline moves through on its journey from one diatonic note (a pitch that belongs in our key) to the next. While chromaticism doesn’t receive a lot of love in the world of pop, it’s one technique that distinguishes jazz (and video game music) from popular music.

What ultimately makes this bassline — and the song at large — such an appealing piece of music is that it incorporates standard jazz traditions (a ii-V-I progression, root notes on downbeats, stepwise motion towards the downbeat, and chromaticism) while sprinkling in its own spices: unique chords lead back to the ii chord in each progression, the anticipated leaps momentarily break up the on-beat stepwise approaches to the downbeat, and Pauline makes her unanticipated return as lead vocalist. When writing any piece of music, whether it’s a walking bassline or a pop production, it’s important to balance satisfying the audience’s expectations with surprising them with less expected choices. This idea transcends the realm of music, and is perhaps what made Super Mario Odyssey such a successful game as well – it’s both an introduction of fresh concepts to the Mario franchise (such as nonlinear gameplay and a massive T-Rex) and a love letter to past games, incorporating gameplay from entries reaching as far back as the beloved Super Mario Bros.

Check out Super Mario Odyssey on the Nintendo Store.