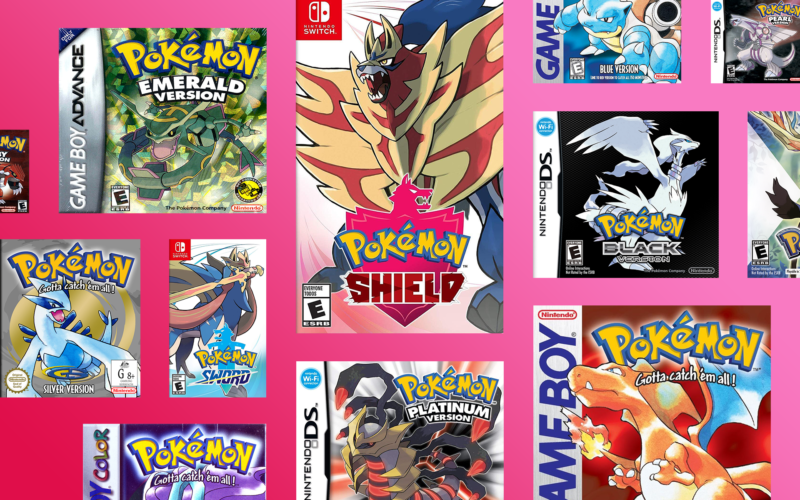 It wouldn’t be an understatement to say that the Pokémon games contain some of the most widely-recognized and beloved pieces of music, both within and outside of the world of video games.

While a handful of composers contribute to the music of more recent titles, director and composer Junichi Masuda was exclusively responsible for the soundtrack of 1996’s Pokémon Red and Blue (originally released as Red and Green in Japan). From the spirited horns of Ruby and Sapphire to the ukulele strums of Sun and Moon, it goes without saying that subsequent generations all have their own distinct sound. However, the first generation games are absolutely influential in how they crafted the unmistakable core musical identity of Pokémon that’s heard across each and every game that followed.

Though there are a number of franchise-defining compositional techniques that Masuda pioneered with Red and Blue — from stacking chromatic runs in battle music to using vivid counterpoint to imply harmony — there’s one musical element that screams Pokémon like no other. In celebration of Pokémon‘s 25th anniversary, let’s take a look at the I – bVII – I chord progression, and how some of Pokémon‘s most important themes are centered around it.

The I – bVII – I chord progression

Let’s start off by taking a look at the progression itself:

In a major key, we expect to hear a major seventh (ex. B natural in the key of C) instead of a minor seventh (ex. Bb in the key of C). Therefore, the bVII chord — which is built on the minor seventh — tends to catch us by surprise. While the flattened scale degree feels darker than what we’re used to hearing in a major key, the major quality of the triad prevents it from sounding dissonant or sinister. The emotional end result is something that’s a little perilous but overall proud and optimistic — a perfect color for conveying the feeling of adventure.

A major scale with a flattened seventh is also referred to as the “mixolydian mode,” and it would be totally fair to analyze a lot of tunes in the Pokémon soundtrack using this mode. Speaking of which, now that we have an idea of what the chord progression sounds like, let’s dive into three themes that appear across the entire Pokémon franchise that are defined by it.

Pokémon’s title screen music is perhaps the single most popular piece in the entire series. Although it experiences re-interpretations from game to game, the main melody and the fundamental chord progression always serve as the theme’s core framework. Below is a transcription of an excerpt from the original Red and Blue version, along with an accompanying audio example. You’ll notice that the audio features an inner voice that was omitted from the transcription to keep things from getting too chaotic (the melody and bass are really all we need for our analysis). That said, here’s a zip file that includes the MIDI for all the pieces we’ll be looking at, inner voices and all.

After unapologetically arpeggiating the I chord, the melody leaps directly up to the flattened seventh, highlighting it as a central sound of the soundtrack before the player even embarks on their journey. The piece oscillates between the I and bVII chords a few times before heading to contrasting sections, which feature new progressions but continue to make use of the flattened seventh in the melody.

Another iconic entry in the Pokémon franchise, this track can be found in every main-series Pokémon game (with the sole exception of Sun and Moon, which did away with gyms in favor of island challenges). Though less liberties are taken with the theme in comparison to the title screen music, there are definitely still changes from generation to generation, most notably in the arrangement. For consistency’s sake, we’ll be again looking at a transcription of the original Red and Blue version. 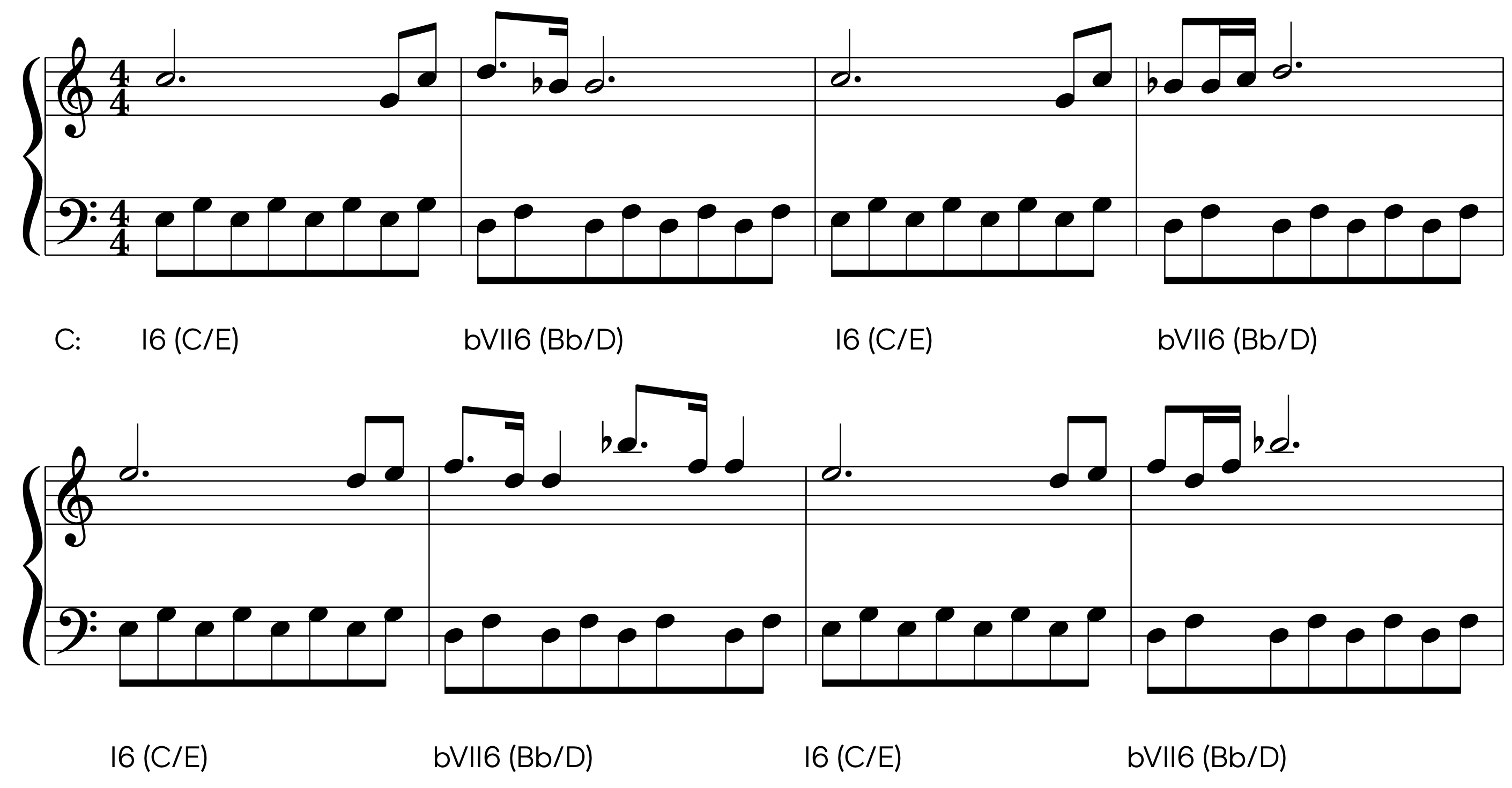 You can’t really emphasize two chords more than this theme does. While the title screen music moves on to explore different progressions, (after a brief opening statement) this piece exclusively cycles between I and bVII for its entire duration. And this makes total sense; whereas the title screen music is made to touch on the full emotional scope of the game, this piece is meant to set a consistent mood across all of the gyms that the player challenges — and it does a great job at doing just that.

One of Pokémon‘s most staple gameplay devices is evolution; there’s nothing as exciting as leveling up a Pokémon, finishing a battle, and then — after a dramatic halt in music — witnessing it transform into a new and more powerful form. The iconic fanfare that enters upon the evolution’s completion congratulates us and our companion. And although it only lasts for a few seconds, even this piece manages to weave the I – bVII – I chord progression into its composition.

The use of the bVII chord is a little more subtle here in comparison to the previous two examples, implied primarily by the bassline in the second measure. That said, a ton is implied in this fanfare; in fact, the I chords don’t even include the root, so the fact that the flattened seventh is incorporated is a testament to how key the pitch is in the harmony that Masuda sought to convey.

Back in the day, the limited number of audio channels the GameBoy offered required composers like Masuda to make clever use of counterpoint to imply harmony, or sometimes just allow the listener to use their imagination to fill in missing voicings. In retrospect, this limitation directly shaped the sound of Pokémon and many other games of the era.

Pokémon has developed into becoming the largest media franchise in the world, with eight generations of main series games (as of today) and countless spin-off titles released over the span of over two decades. Though there are many factors that combine to make the series the success that it is, an undoubtedly key aspect is its incredible world-building. The world of Pokémon is imaginative and full of surprises but also consistent in its core themes and values, and the culminating experience keeps players coming back to explore the newest region and its inhabitants.

The musical identity that Masuda designed directly contributes to the fabric of Pokémon‘s world, and for this reason, the I – bVII – I chord progression is far more than just an arbitrary set of recurring pitches. Rather, it’s a thoughtful choice that simply but elegantly captures Pokémon‘s core emotional themes such as adventure, challenge, and joy — and the fact that it continues to do so generation after generation is a pretty incredible thing.