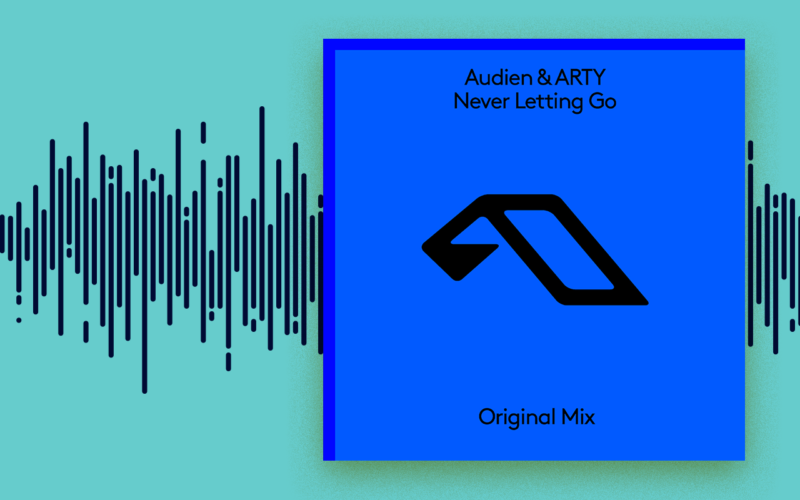 The track is at once indescribably unique and instantly familiar, featuring a larger-than-life build and a lush vocal sample from Karra that feels timeless from the first listen – hear “Never Letting Go” below:

In this special edition of Hits Decoded, Audien, ARTY, and Karra join us in our exploration of three elements that make “Never Letting Go” soar.

1. A blend of lush synth layers

The many lush synth plucks, pads, and leads in “Never Letting Go” form the foundation of the song’s arrangement and play a key role in conveying its powerful emotive character. Speaking on how the two craft their captivating synth sounds, Audien tells us, “ARTY and I sort of followed a technique we’ve practiced for years on this song. It’s really a matter of filling a box with three or four different layers that each bring a unique element to the stack. Off the top of my head, we used Sylenth1, Nexus, Serum, and Massive.”

Although these plugins help Audien and ARTY achieve a solid starting point, how the synths are processed is just as important. “For me, to get this big sound, it mostly comes down to the dynamics and effect plugins I use on the synths,” ARTY explains. “Reverb is very good for making synths wider and more spacious. I use some light compression on the synths channel to make sure the sound stays tight. A mild amount of saturation and distortion can also be useful in some cases, when you want to get some extra harmonies and a more cranky sound.”

Whereas most electronic music follows song structures that oscillate between builds and drops, “Never Letting Go” is unique in how it consists of a continuous build and single drop. A gentle but unshakable feeling of anticipation emerges as the track builds and builds, and when the drop finally hits two minutes in, its impact is exhilarating.

“Audien and I were talking a lot about what kind of arrangement we should use in this track,” ARTY recalls. “In the end, it felt right to have only one drop. The length of the track might be a little bit short, but if you listen to it from the top to the bottom, it’s the whole and complete story we wanted to tell.”

While ARTY tends to gravitate towards what he refers to as “the more common breakdown-build-drop-repeat formula” with his other music, the structure of “Never Letting Go” feels more at home for Audien. “This is totally what I call the ‘Anjuna’ structure,” he tells us. “One big epic breakdown into one big epic drop, with long intros and outros. This is how I’ve done all of my music on Anjunabeats – it makes for a concise but epic outcome.”

Lastly, Karra’s stirring vocal line (“Hold on, I’m never letting go”) serves as a lyrical and melodic focal point that ties the track together. Audien recalls, “ARTY actually provided the vocals. He found them on Splice (the best thing that ever happened to music production), and it was near the end of the production process. We knew we wanted something, but this was perfect. When I found out it was Karra, I was super stoked because I already knew her! She’s rad.”

ARTY echoes Audien’s sentiment: “The vocal was added when we were working on the breakdown,” he notes. “We felt like it would be nice to have some sort of small hook that we’d use just a few times to accentuate the tone of the track. So, when I was searching the Splice library for inspiration, I stumbled upon Karra’s sample pack and found that beauty. We didn’t even have to pitch the vocal despite it being a different key. Harmonically, it worked out perfectly.”

Karra has heard her vocal samples used in countless tracks, by everyone from David Guetta to Jai Wolf. Despite this, Karra finds a unique joy in hearing her vocals on “Never Letting Go.” “I would consider every track that has used my samples to be special, because each song has a unique use of my voice that brings its ideas to life,” she states. “What’s even more unique about this particular song is that a few years ago, Audien had personally messaged me on Instagram saying that he was a fan of my voice and some of the songs I had out during that time. That was such a huge moment for me because I had been a fan of his ever since his collaboration with Lady Antebellum. While that song was released, I was actually in Nashville interning for the company that their producer, Paul Worley, was a part of. I would watch them rehearse for live shows, and it’s a blessing when things come full circle like this.”

“We had kept in touch since then, and on the release day of ‘Never Letting Go,’ Audien messaged me saying, ‘surprise.’ When I listened to the song I immediately recognized my voice, and I was so impressed with the way they chopped, edited, and blended the elements of my samples together to create a complete track. I love how the simplicity of the lyrics compliments the complexity of the arrangement, in such a way that the vocals are simply there to support the story within the progression. They faintly dance above the notes, invoking a dreamlike experience to the listener. I’m honored to have been an instrument in their vision.”

Ultimately, “Never Letting Go” is more than a top-notch dance track – it also represents the interweaving of the narratives of three incredible artists. What are your favorite aspects of “Never Letting Go?” What track do you want to see us feature on Hits Decoded next? Let us know in the comments below.

What we learned from the top samples on Splice in 2018

Let’s take a look at how sounds found on Splice were used in some of 2018’s biggest releases.