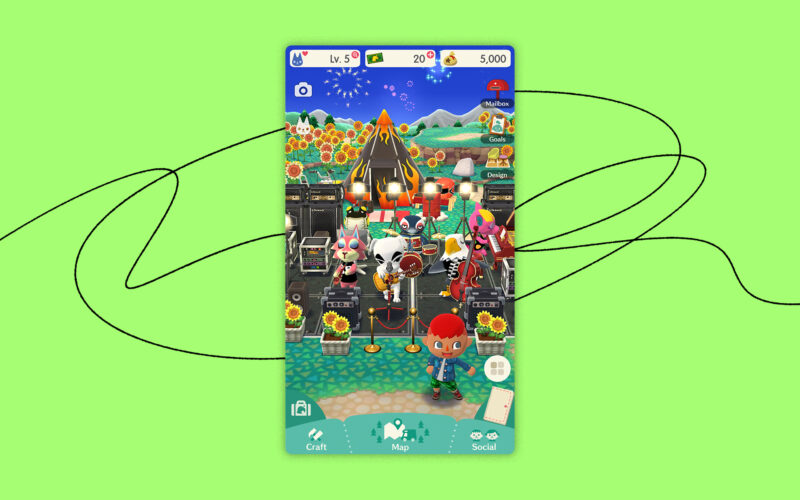 Animal Crossing: Pocket Camp, Nintendo’s mobile game entry for the widely-beloved Animal Crossing series, has captured the hearts of tens of millions of players around the world.

This may be in part due to how pleasantly the franchise translates to mobile—it’s an open-ended game that naturally encourages you to take things easy. You get to chip away at whatever aspect of the game you want to explore at your own pace, and real-time waiting for various events (such as fruit regrowing or furniture being crafted) is an inherent charm of Animal Crossing rather than the annoyance that it often is in other mobile titles.

The laid-back music is undoubtedly a big contributor to Animal Crossing: Pocket Camp‘s leisurely tone, delivering some playful tunes that are reminiscent of compositions in the main series. In celebration of Pocket Camp‘s five-year anniversary, let’s explore the melodic and harmonic elements in the main theme that make your virtual campsite such a pleasant place to be.

A transcription of the melody and a functional / harmonic analysis of the chords are below in score notation as well as MIDI for less sheet music-minded creators. Download this project on Splice for free to open up the composition in your DAW and experiment with it yourself.

Although the theme is only 30 seconds long, the melody is packed with small details that make it simply delightful. Right off the bat, the piece introduces an arpeggiated motif (a recurring musical idea) that’s the core ingredient of the theme’s catchiness. The way the pitches hop up and down gives the tune a lighthearted playfulness.

What’s more, rather than immediately developing and changing up the motif, the first two bars of the melody are repeated exactly. This helps underpin the idea that the game isn’t rushing to take you from one place to another—even the music is taking its time.

These arpeggiated figures are contrasted in the next four bars (mm 5 – 9). The contour here is overall more stepwise, with only a few leaps here and there. The rhythm is also sparse by comparison, carving out a songlike melody that feels idle and carefree. Although a phrase isn’t repeated exactly as in the previous four bars, rhythmic symmetry within the section still sweetly ties the passage together.

The grand finale of the little tune blends together ideas from both of the sections detailed above. It starts off with a reiteration of the first motif in a new key, but then follows that up with a line that draws on rhythms seen in the second section. We climb to our highest pitch yet in measure 12 to top it all off before looping back to the beginning, concluding our melodic journey with a (very peaceful) bang.

Upon an initial glance, this harmonic analysis may feel surprisingly overwhelming. The piece definitely makes some interesting harmonic moves despite its apparent simplicity, but as we break down each section, you might begin to see that it’s not too complicated.

The first section (mm 1 – 4) is in the home key of F major, and aside from a small stop on gm7, stays on the tonic chord for its entirety. The gm7 can be thought of as a diatonic passing chord, which is a chord where the bass note connects two other chords. The tonic chord’s various inversions help the passage get a lot of mileage out of a single chord without forcing the piece to really ‘go anywhere’ for its simple introduction of the theme.

The second section (mm 5 – 8) starts with a direct modulation (a key change without a pivot chord to connect the transition between keys) to D major. The progression continues to primarily rely on the tonic chord, but sprinkles in the same passing chord (now em7 in our new key) a little more generously than in the previous section.

The final section (mm 9 – 12) is where some spice comes in. Now in B major, the section starts with the now familiar trick of using inversions of the tonic chord connected by passing chords. However, chords that follow—like B/E and F#add9add13—come from a jazz palate, and frankly the functional analysis doesn’t do them much justice.

The piece then heads back into F major in the last bar. While there’s no pivot chord, the F# in the bass of measure 11 leads nicely to the G on the downbeat of measure 12. The final chord, C, serves as the dominant of our home key of F major, completing the loop seamlessly.

While we dug into some of the classic music theory aspects of the piece, there’s plenty more to be explored. The modest arrangement, gentle tempo changes, and wholesome performances all contribute to the overall allure of this piece and the music of Animal Crossing at large. Music theory provides us a great tool to understand how and why music “works,” but it’s important to always connect it back to the emotions we experience and the other elements at play that can’t be expressed via sheet music or MIDI rolls.