The fantastic history of rhythm games 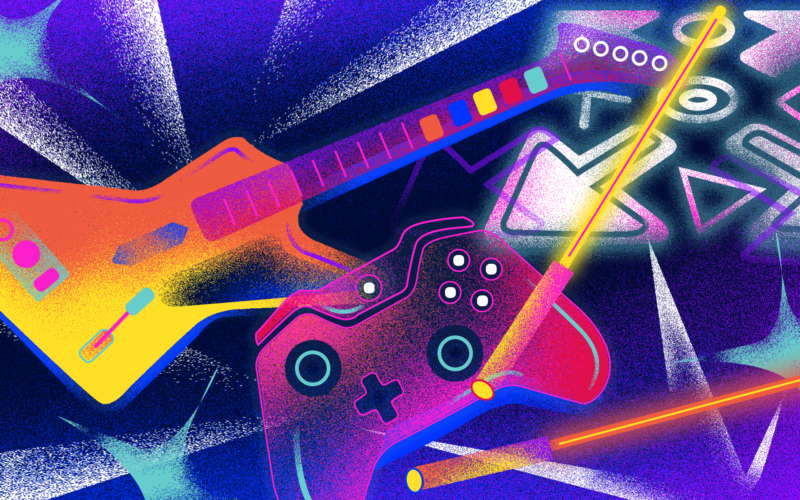 There’s magic in the air when someone expertly crushes a round of Dance Dance Revolution.

The music is distinct, a frantic blend of disco and happy hardcore, with stylish characters on-screen and bold lights and design framing the dance pad. The player, locked in a groove with the music, is rewarded for active listening and tight reflexes, responding to the music’s rhythms, movements, and melodies. Rhythm games demand your attention visually, sonically, and physically in a way that’s wholly unique to the art forms of both music and video games. A great rhythm game establishes its own distinct identity through visuals, music selection (whether original or compiled), and interaction.

At their core, the gameplay of these games has largely remained the same since 1996. A series of ‘notes’ fly toward you or appear in a sequence, and the player has to time their input to sync with the ‘notes’ that are timed with the music. However, that doesn’t mean that with each passing year, rhythm games haven’t found new ways to innovate within the world of interactive music experiences. Throughout their history, these games have continually pushed the envelope of what a game could be, and what the experience of music listening could look like, and they deserve to have a place within the upper echelon of interactive art forms.

This particular combination of music and gameplay can be traced back to none other than Nintendo, with the release of Dance Aerobics in 1987. Dance Aerobics, part of a set of games designed around the Power Pad, was the first video game to combine music and now iconic timing-based gameplay. Marketed as a way to “Hop, skip, and jump your way into shape,” it was a simple game with simple music, but it created a template for the explosion of variety that would come ten years later.

1996 is the year that really kicked off the rhythm game boom, with Beatmania taking over arcades and PaRappa the Rapper taking over consoles. PaRappa the Rapper was an independently-produced hit. The gameplay was a refined version of Dance Aerobics: listen to a part of a song; watch the series of required inputs; mimic the inputs; advance through the song. Where PaRappa the Rapper exceeded, however, was in attitude and point-of-view (series creator Masaya Matsuura thought it was imperative for the game to have the capability for players to improvise and add their own ‘beats’ while they played). The game was packed with style, from the goofy original tracks to the distinct art direction to the iconic character design — PaRappa the Rapper was a major success in Japan and around the world.

Beatmania, developed by rhythm game pioneers Konami, was an entirely new gaming concept in its own right that blended real-time gameplay with a DJ booth-style control system and original tracks in a variety of genres ranging from hip hop to techno. The premise was simple: pick a song of your choice; match the inputs of that song in real-time with a controller; get a score; repeat. This template became a goldmine for Konami (and eventually others), and Beatmania is the franchise to thank for it. It even lead to the formation of a new subsidiary, Bemani, that would solely focus on music games moving forward.

Bemani further expanded on the genre with Guitarfreaks and Pop N’ Music in the years that followed, making way for the behemoth that is the Dance Dance Revolution series to debut in 1998. For those of you that haven’t laid eyes on DDR, it follows the same style of gameplay as the Beatmania games, except it focuses on ‘dancing’ to the music, using your feet as the controller rather than your hands. Dance Dance Revolution is one of the scarce examples of something with ‘revolution’ in the title that wasn’t hyperbole. This series was and continues to be absolutely massive, having a tremendous impact on gaming and popular culture. It was well-branded, had a near-perfect gameplay style that was simple but incredibly deep, and of course, had absolutely phenomenal music. In the 21-year history of the series, it has been released across 16 platforms and seen 17 mainline titles (and upwards of 100 spin-off games). The Dance Pad controller is iconic within the larger world of video games, with fans using the controller to beat games like Kingdom Hearts and Bloodborne to this day. There’s even a movie in the works as of 2018.

The early days of rhythm games post-DDR saw a plethora of eccentric games get released, both in the arcade and on consoles. Drummania replicated the peripheral-based gameplay of Beatmania and Guitarfreaks but focused on drumming, and was also the first game to introduce co-op performing (which would later take off with the Rock Band series). Karaoke Revolution and SingStar introduced singing-based rhythm games to home consoles across the globe. Peripherals for home console games were seeing more experimentation as well, with games like Donkey Konga and Samba de Amigo testing the limits of how out-there these games could get in terms of music and playstyles.

Beyond the world of peripherals and arcades, games like Space Channel 5 and Gitaroo Man found themselves with rabid cult fanbases due to their over-the-top art direction and storytelling. Even the classical genre got its own game in the form of Mad Maestro. Clearly, there seemed to be no shortage of innovation happening in the space, especially amongst Japanese development teams. However, amongst these Japanese success stories, a small, then nearly unknown American company called Harmonix quietly released two games — FreQuency in 2001 and Amplitude in 2003 — that slowly built dedicated followings, leading them to bring about the next phase of the rhythm game boom.

Although FreQuency and Amplitude garnered critical success and even a handful of awards, the games did not fare as well when it came to sales. However, these early titles put Harmonix on the radar of none other than Konami, who approached the team to develop Karaoke Revolution. This was Harmonix’s big break, and showed them that their games did in fact have the potential for widespread commercial success. With the combined experiences of developing their own avant-garde titles and working with a major corporation on a mainstream hit, Harmonix were in a near-perfect position when RedOctane approached them with an industry-changing idea in 2004. Guitar Hero, with a RedOctane-designed guitar controller and expertly-crafted gameplay from Harmonix, made its release in 2005. After Harmonix was acquired by MTV, Rock Band followed in 2007 and the rhythm game boom was upon the US market. Excluding the underperforming 2015 reboot, the Guitar Hero franchise grossed over $2 billion dollars in its heyday, something that only legacy franchises Madden and Super Mario had been able to achieve at the time. Rock Band, with its variety of gameplay styles and focus on original, licensed music, saw its own share of success, reaching $1 billion dollars in revenue in a short 15 months.

Building on what Harmonix had learned in their early years, these games were designed to be accessible by the non-gamer, which undoubtedly contributed to their staggering success. Sure, Konami had basically come up with the same idea a number of years prior (they even sued Harmonix and eventually settled out of court over it), but Harmonix was shrewd in bringing that gameplay out of arcades and into the homes of gamers and (most importantly) non-games alike. Both franchises also clearly understood the importance of including popular music in their games, making the premise even easier to understand for those who were unfamiliar with video games.

Where these games truly succeeded, though, was in capturing the magic of performance for American audiences. There’s always been some kind of debate around these games and how they may influence people to pick up the ‘real thing,’ whether it’s learning how to dance, play guitar, et cetera. Yet, that viewpoint is at odds with the fact that playing these games are their own performance. The act of performing for friends, strangers, or yourself is clearly its own reward, and Harmonix (and their Japanese counterparts) understood that deeply.

The astronomical success these games experienced right out of the gate may have also been a warning sign that these heights were not sustainable. By 2010, after countless spin-offs and sequels, both franchises went on hiatus. There were simply too many variations of the same concept, too many peripheral units starting to gather dust, and too little in the way of innovation since 2005. It wasn’t to say that the genre ‘died’ in 2010; these franchises merely settled back into more regular sales numbers. Although these games had captured a massive portion of the market and the culture at large, there were still all kinds of weird rhythm games released in the latter half of the 2000s that were continuing to innovate and find new ways for players to interact with music. Mobile rhythm games had begun to take off, as did more gesture-based games with the rise of motion capture technology — two advancements that signaled what the future of the genre was going to look like.

The present and future of rhythm games (2010 — present)

Since the start of the 2010s, rhythm games have continued to embrace new technologies while also offering more specialized and stylized experiences (a path that was so popular back in the early 2000s). With the explosion of indie gaming in the early part of the decade, a ton of new ideas have been brought to the table. In addition, major studios (in Asia in particular) have been continuing to introduce all kinds of innovative ideas to the market. Mobile games like Cytus, Tap Tap Revenge, and Groove Coaster have grown into major franchises, capitalizing on the pervasiveness of smartphones. Motion capture-based games like Just Dance have grown into wildly profitable global franchises with annual release cycles as if they were AAA sports franchises. Indie games like Thumper and Sayonara Wild Hearts have taken a more traditional approach while cranking up the art direction to 11 with highly imaginative visual universes and musical palettes. Beat Saber, one of the most successful VR rhythm games, has become ubiquitous within the genre, and inspired a whole new world of rhythm action games that combine gameplay styles. Idol-related rhythm games are practically their own genre at this point, with too many spin-offs, sequels, and tie-ins to easily name. Arcade games like Dance Rush Stardom have shown how new technologies can improve upon time-tested formulas to create even more engaging dancing simulators.

At their core, rhythm games are a celebration of everything that makes music so powerful. They capture the spirit of a performance, they celebrate the design and art direction of music, and they understand that a communal music experience is the best music experience. These games know that every person can, with a little guidance, feel like a pop star, or a dancer, or a lead singer, and that experience of feeling nothing but the music and the joy of performing has had — and will continue to have — a major impact on industry and culture.