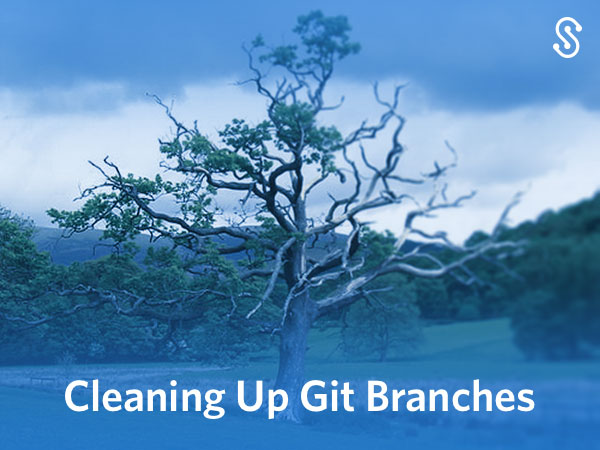 Navigating a git repository can get unwieldy when there are lots of branches, especially if many of those branches aren’t relevant anymore. The other day we realized that we had 192 branches on our front-end codebase, 127 of which were already merged.

Time to clean up!

You can chain together unix commands to do all the cleanup in a single go.

If we want to do the same cleanup locally, the command is:

On a normal day, you might type git push. Git is smart enough to know that you probably want to push to a remote named origin, and that you want to push any local branches to remote branches of the same name. If you want to be specific about it, you can say:

which will push the local feature-x branch up to the remote feature-x branch.
This is great if your local branches are named the way you want, but what if they’re not? For example, what if you want to deploy staging to Heroku? Heroku runs whatever is in master. If you push your local staging to a heroku branch named staging it will be there, but nobody will see it. You would have to rename your master to real-master, rename staging to master, and then push that up to Heroku. There’s a better way. You can specify the local and remote names separately:

Which brings us to the deletion command:

This pushes up an empty branch reference to the specific branch on the remote, which deletes it.

So we could go ahead and type out git push origin :old-feature-x over and over again to delete the 132 merged branches, or we could write a script that does it all at once.

To see all the remote branches, we can use usual git branch command with the --remote flag (-r for short).

There are two flags that can quickly show us which are merged into the branch that you are currently on: --merged and --no-merged That should be master, if you’re cleaning up, otherwise this can go horribly wrong.

The output includes two lines that you don’t want to delete:

Let’s get rid of it using grep’s --invert-match flag (-v for short).

Each branch in the output is prefixed with origin/, which doesn’t quite work. We need to change that to :. Sed can help.

Now we need to loop. We certainly could use a bash for loop:

On the other hand, there’s a handy unix command named xargs, which allows you to run a command on each line of the input.

When Things Get Out of Date

Sometimes your local environment knows about branches, but the remote has already deleted them. That will blow up, since you’ll be trying to delete branches that don’t exist. Not a huge deal, but it can be avoided using:

Finally, you can create an alias in your shell configuration file (e.g. .bash_profile):

Update: Thanks to @luislavena for pointing out that git remote update --prune is the equivalent of git fetch origin && git remote prune origin.