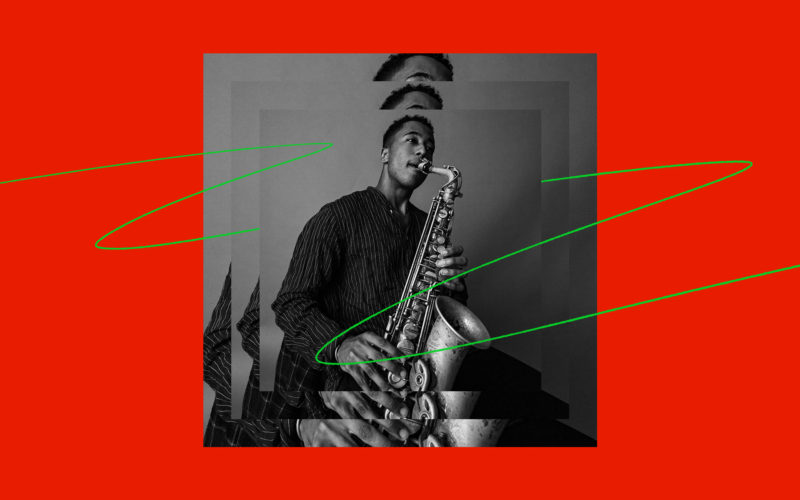 Braxton Cook is a jazz wunderkid who effortlessly navigates the sonic worlds of jazz, soul, and R&B.

While he’s best known as a saxophonist, Cook also captivates audiences with his soulful vocals and performances on other instruments including the guitar and keys. He has played alongside the likes of Christian Scott aTunde Adjuah, Tom Misch, and Mac Ayres, and also recently performed solo for an NPR Tiny Desk performance.

We recently had the opportunity to sit down with Cook to discuss his history with jazz music, the evolution of the genre, and more – read on for highlights, and check out his hand-selected Collection of sounds created by Black creators here.

What’s your personal history with jazz? Where did you first hear it, and when did you decide that you wanted to create your own music in its style?

I grew up in a very musical household – my dad always had Motown records playing in the house, and my mom played Gospel songs every day of the week. My ear always gravitated towards the horns on classic soul records in particular. I used to sing along to all of the Earth, Wind & Fire horn parts and Maceo Parker solos from James Brown records. I think I always had a love for wind instruments.

It was sometime during my middle school years that I decided to dig a little deeper into my father’s music collection in our basement. I initially found some Grover Washington, Jr. albums like Winelight (which featured “Just the Two of Us” among others classic recordings), and albums from Kirk Whalum. So, I studied Grover Washington Jr., and eventually delved into his influences as well. That’s how I discovered Cannonball Adderley and Charlie Parker. As soon as I found Cannonball Adderley, I was hooked and I never looked back. That’s how I first discovered jazz music.

As you learned the craft of jazz yourself, did you have any mentors who you looked up to? Where did you go to learn more about making music in the genre?

By the ninth grade, I began studying jazz with Paul Carr, one of the most prominent jazz instructors in the DMV area. He was a big influence for me. Under his tutelage and mentorship, I was able to progress rather quickly.

His main method of jazz instruction was through a process called transcription, which I still do to this day. This is where you listen over and over to a recording and memorize the parts note-for-note. Then, you perform that learned section with or without the recording, attempting to match the notes, intonation, inflections, and style. While this is a skill some of us have learned naturally in church, what makes jazz transcriptions somewhat different is that we often write out the notes and the harmony to these recordings by hand to later analyze them. During this time, I was transcribing frequently and I learned most of Cannonball Adderley’s discography note-for-note. Naturally, I also learned songs and solos by Miles Davis, John Coltrane, Joe Henderson, Sonny Stitt, Johnny Hodges, and Dexter Gordon, just to name a few.

I also had a few friends in the Washington D.C. area who greatly influenced me and helped me navigate the D.C. jazz scene. Elijah Balbed was a great tenor saxophonist and peer who used to practically live on U Street because he was out there every night. He introduced me to a slew of D.C. musicians like Kris Funn, Allyn Johnson, Tim Green, Nate and Noble Jolley, and Donvonte McCoy.

All of these musicians embraced me and allowed me to sit in on their gigs at the ripe age of 17 years old. These early years in the D.C. scene not only prepared me for my years at Juilliard, but they also shaped me musically and influenced the music I make now, because I played so many different styles of music during this formative time. I had church gigs, straight-ahead jazz gigs, big band reading gigs, go-go gigs, and a weekly dance club gig in Dupont Circle at a place called 18th Street Lounge. I think having these musical experiences early on really helped me develop my sound and taught me to not box myself into just one particular style.

In recent years, I’ve been heavily influenced by the artists who I’ve worked with. Christian Scott, Jamire Williams, Marquis Hill, Joel Ross, Tom Misch, Phony Ppl, Solange Knowles, and Emily King (just to name a few) have all inspired me a great deal in the music that I create now.

I’ll never forget the time that Wynton Marsalis came to my high school. It was my sophomore year. Schools from all over our consortium were bussed in – my auditorium was packed! The Washington Post, The Gazette, and a few other press outlets were crouched in the front row. Suffice to say, the pressure was on.

Our big band was performing the music of Duke Ellington that season, and Wynton asked to hear “It Don’t Mean a Thing.” After our first time playing through the chart, Wynton focused on the rhythms for a while to get them to have a better swing feel. The section he looped over and over was the solo section, where I was featured. So after a few times around the form, he told me to stand up and keep playing. The nerves really set in now.

Now, Wynton walks over to the piano to help the pianist comp, and he’s discussing how you have to interact with the soloist. Eventually, Wynton and I start to vibe off of each other – in other words, we were responding to each other musically. He looks up from the piano and stops the band, and says on the mic, “You know, sound good! What’s your name?” I respond “Braxton, Braxton Cook.” Then, Wynton says to the crowd, “Give Braxton a round of applause.”

I sat down and the big band went into another section of the piece. At this point, I’m buzzing and shaking a bit from how amazing this moment was. After the masterclass, Wynton comes up to me and reiterates that I sounded great and that he expects to see me in NYC one day. A few years later, I ended up actually getting into The Juilliard School and performing at Jazz at Lincoln Center, where I got to meet up with Wynton again. We exchanged information and he’s been an incredible resource ever since!

How has jazz evolved since you got involved with it? How have the sounds, the people making it, or the places where it’s heard changed? On the other hand, are there certain aspects that have stayed the same?

I believe jazz music, at its core, has always evolved and will always continue to embrace different styles and elements of our culture. Jazz is a Black American art form, similar to hip hop in how it was created here in America by Black people – yet, even in its inception there were always elements from different minority cultures.

The first artist I toured with after moving to NYC was Christian Scott aTunde Adjuah. Anyone who knows Christian knows that he’s a forward-thinking artist who’s rooted in the history of the music, but he’s also very focused on the evolution of the art form. My six years in his band greatly influenced me and my music as well.

These are beliefs I’ve always had, but meeting Christian was a confirmation for me to continue pushing the boundaries of this art form I grew up loving. Artists like Miles Davis and Herbie Hancock have never been shy about trying to find something new sonically, in this broad genre we’ve come to call jazz. I look up to Miles as someone who ventured to shift the sound of jazz multiple times. That’s something I aspire to do in my own way.

Since the start of my professional career, I’ve seen more and more artists incorporate hip hop, trap, indie rock, and jazz elements into their music. On the flip side, I’m seeing more and more R&B and pop artists incorporate more live instruments and jazz-influenced acoustic sounds into their recordings. It’s cool to walk into coffee shops and retail stores and hear more acoustic instruments on recordings.

Where do you think jazz is headed? Who are some artists who you think are pushing the genre forward today?

As it stands, I see two main subsets in the jazz world. The first being the more modern and straightforward subset, which is really interesting and continuously developing. Some artists who are developing this sound and pushing it forward include Ambrose Akinmusire, Wayne Shorter, Mark Turner, and Gerald Clayton. The other subset is more of a crossover sound that’s incorporating things like hip hop R&B, and pop elements. Some musicians that are pushing this sound forward include Christian Scott, Robert Glasper, Nick Payton, and myself.

Ultimately, I see jazz as a whole getting more and more eyes and ears on it as the years go by. I think both subsets of the genre inspire the other, and help it gain an audience while continuing the development of the art form itself.

What are the hurdles jazz faces as it heads towards the future you’re envisioning, and how might the musician community overcome them?

Many jazz musicians are out of work right now due to the pandemic, and it’s wreaked havoc on our community. In addition, the recent spike of jazz club closings all over the country definitely presents an issue for jazz music. Ultimately, the country will bounce back and the music will overcome these hurdles. Jazz will bounce back just like it has done repeatedly for the past century. I think there’s a truth in this music, and it will always find a way to stay around and thrive as long as it continues to evolve. 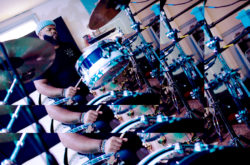 Drumming legend Pudge Tribbett (Stevie Wonder, Lana Del Rey) sat down with us to discuss musicianship, the impact Gospel music has had on his journey, and more. 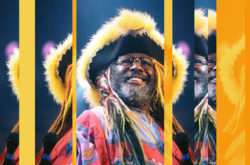 In celebration of Mothership Connection’s 45th anniversary, we caught up with George Clinton to discuss the creation of the album, its influences, and more.