Harmor from Image-Line: Powerful Additive Synthesis at Your Fingertips

Harmor is one of Image-Line‘s most popular synthesis plugins. It offers a fresh approach to creating sounds by providing you with a unique and powerful additive engine that’s capable of synthesizing up to 516 voices in concert, and presents its features in a relatively straightforward and familiar interface that’s reminiscent of subtractive synthesis modules. Harmor ships with a robust preset library that plays to all of its strengths and showcases its many talents; here we’ll take a look at some of Harmor’s features so that you can familiarize yourself with its interface and start designing your own sounds with it. Image-Line’s Harmor is currently among the top 10 instrument plugins on Splice – Sign up for a free Splice account to download full projects that take advantage of Harmor’s many capabilities and to get a sense of its power.

All sounds in the known universe, both musical and not, are composed of sine wave frequencies. They are the building blocks upon which all complex sounds are constructed. We refer to the strongest frequency present as the fundamental, and all other frequencies as harmonics of the fundamental frequency. 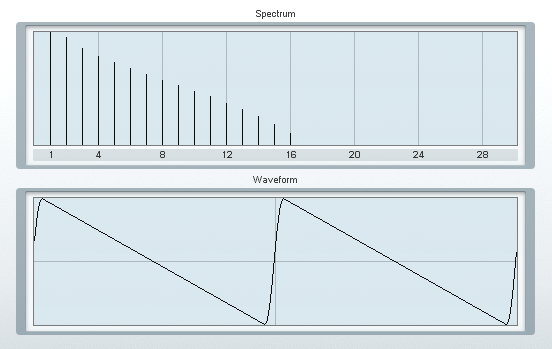 The harmonic signature of a sawtooth waveform

The relative strength of each constituent harmonic is largely what determines the defining characteristics of a given sound. It is, for example, what makes a flute sound different from a clarinet, when they are playing the same fundamental note. A flute is known for having strong even harmonics, whereas a clarinet is known for having strong odd harmonics. This is what defines the character of each and gives each voice its own harmonic signature. Since Fourier theory states that any signal can be expressed as a sum of a series of sinusoids (sine waves), it follows that any complex sound can be reconstructed using a recipe of simple sine waves as ingredients. Additive synthesis takes this very approach to sound construction, allowing you to create complex sounds using simple sine waves to synthesize new and exciting harmonic signatures from the ground up.

Much of Harmor’s strength resides in its ability to generate virtually unlimited oscillator shapes using over 516 partials. You can choose from one of many shapes such as Triangle and Square by right-clicking on the Timbre Window and selecting Analyze Single Cycle Waveform, or draw in your own unique shapes using Harmor’s detailed envelope editor that appears when left-clicking the Timbre Window. You can load up to two independent waveforms and mix them via the mix knob, with a drop down menu provided for choosing the blend type that Harmor will use to mix the two signals. Harmor also provides waveform playback adjustment controls for determining the oscillation start-point and for injecting playback randomness to the signal. To the right are three subharmonic generators which add richness to the overall timbre by synthesizing harmonics at octave intervals below the fundamental frequency. You can access the spectral analyzer at right at any time to see an accurate representation of the harmonic intervals currently being produced.

Harmor’s filter interface is modeled on that of familiar subtractive analog synths, though its methods of operation are quite different. Subtractive synthesis generates an already harmonically rich waveform, and then uses filters to attenuate those harmonics. Additive synthesis is different in that the action of the filters occurs at the generation stage; when you engage a low pass filter, for example, it actually diminishes the amplitude of the upper harmonics at the oscillator module itself. Harmor features two filters that can be used independently, in serial, in parallel, or any blend in between, and provides you with many classic filter types such as Low Pass and High Pass as well as several modern additions such as Crude Band Stop and Snake Low Pass. It also offers the option of creating multiple custom shapes, as is the case with most of the modules available with Harmor. By accessing the Envelope tab at right, it’s simple to draw in custom envelope shapes for nearly every parameter available in Harmor. Its dedicated Pluck, Phaser, and EQ modules serve to give you even finer control over the character of the filtering section and the behavior of its central modules, allowing you to create more realistic timbres that better capture the essense of acoustic instruments.

Harmor offers unique sound shaping controls, many of which are only possible through the constructive nature of additive synthesis. Prism shifts the position of harmonics towards or away from the fundamental frequency, creating inharmonic, often metallic effects. Harmor’s Blur module allows you to “smear” harmonic partials horizontally and is useful for creating reverberated effects. Trem simulates the sound of a rotating speaker. The harmonizer module clones and transposes existing harmonics either by semitone or by octave. Harmor also features a powerful additive unison module that is capable of thickening the overall timbre by reproducing and stacking multiple voices while at the same time allowing for per-voice control of panning, volume, pitch, and phasing relative to the root note. Harmor’s pitch section provides fine tuning controls for creating pitch envelopes, adding vibrato, and managing legato settings.

Image Line’s Harmor boasts a hefty effects section that includes distortion, chorus, delay, reverb, and compression. It also provides a Dry Mix control at top to allow for parallel processing, and all effects can be fine tuned by accessing the dedicated FX tab at right and even completelty re-ordered via the Advanced tab to control the signal flow. It’s interesting to note that every single module included in Harmor can be completely re-ordered in the signal path via the Advanced tab, which allows for virtually unlimited possibilities in terms of workflow, sound design, and flexibility.

Accessing Harmor’s Image tab offers you access to an otherworldy palette of sounds. Harmor has the unique ability to synthesize harmonic mappings based on audio files or 2D images, meaning that you can import any audio file or image file that you wish and Harmor will synthesize a unique harmonic signature that represents the file. To import a file, simply click the down arrow located at top left and select Analyze audio file or Open image file to get started. From there, Harmor provides many options for interpretation and interpolation of the data, allowing you to create truly one-of-a-kind sounds.

Harmor offers advanced global controls that allow you to tweak the way that your patch responds to incoming MIDI information as well as its overall pre- and post- FX levels. Also included is a user-definable XY pad for fluid performance and automation programming. It’s here that you can also toggle between Harmor’s A and B parts, meaning that you can actually create two completely seperate patches and blend them together for even more original patch creation and depth. 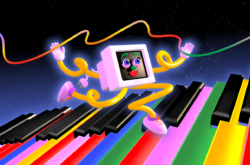 Does Serum give you high CPU usage on your computer? You might not be using it efficiently. We take a look at how to optimize Serum for your productions.

Spire, created by Reveal Sound, is a versatile hybrid synthesizer capable of creating everything from simple sounds to complex multistage waveforms. 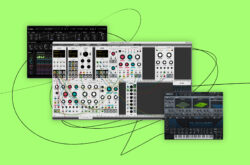 Let’s explore what modular synthesis is and why its principles are worth exploring, regardless of whether you work with hardware or solely within the DAW.