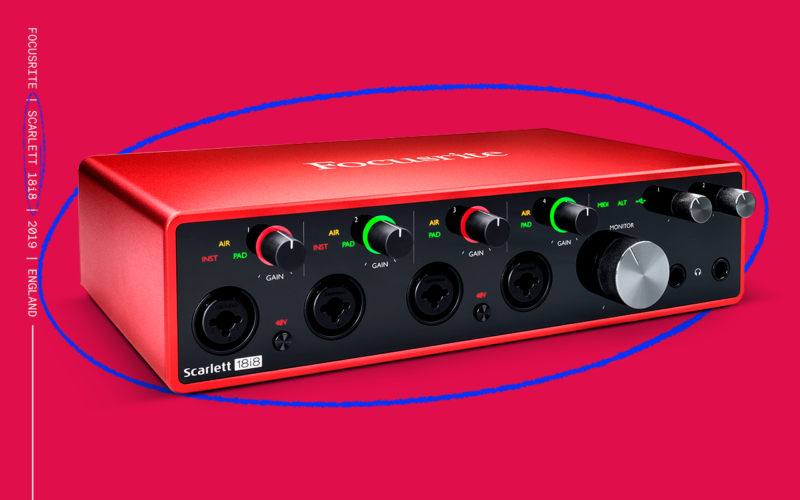 Simply put, an audio interface is a physical device that allows you to get sound in and out of your computer.

One of the first things you’ve probably been told to invest in when starting out as a music producer or recording artist is an audio interface. However, in order to actually know which interface to get, you’ll need to understand the components that make up an audio interface, and why you would need one in the first place.

Why would you need an audio interface?

When you think about it, every mobile phone, tablet, and computer actually comes with its own built-in audio interface. All of them have a mic that captures sound, and speakers or an audio output (such as a headphone jack, for example) that emits sound. So, you may ask yourself, “Why would I need an audio interface if my computer already comes with one?”

Well, the answer is dependent on how you create music.

The truth is, if you aren’t going to be recording anything and you’re just using your headphones, you can possibly hold off on getting an interface for now. But, if you want to record something with a microphone or connect your computer to external speakers, you should probably consider investing in an audio interface.

How does an audio interface work?

Audio interfaces come in many different configurations and specifications, but all of them achieve the same core functions by using variations of the following key components.

Many of the industry’s biggest manufacturers make several variants of the same type of audio interface. More often than not, these variants are based on the number of inputs and outputs the audio interface has. For example, if you take a look at Focusrite’s Scarlett interfaces, you’ll see that one of the biggest differences across each option (alongside more detailed technical specs) is simply the channel count for supported inputs and outputs. More inputs allow you to record more tracks simultaneously, while more outputs allow you to send your audio to multiple audio destinations simultaneously.

If you’re a singer-songwriter or bedroom producer who’s interested in recording no more than two microphones at any given time and you have just one pair of speakers, you would probably do just fine with a simple two-input / two-output audio interface.

Note that some audio interfaces may have options for taking in digital optical inputs to expand your audio interface input and output options—more on this in a later blog post.

You’ll probably see the term supported sample rates on most audio interfaces, along with values such as 44.1 kHz, 88.2 kHz, 96 kHz, 192 kHz, etc. This is related to how the audio interface can handle converting your captured audio (analog audio) into digital signals in a way that allows your computer to ‘read’ them. Naturally, the higher the sample rate, the better the audio quality and the bigger the file size.

Audiophiles and professional engineers often pay huge sums of money for interfaces with pristine state-of-the-art converters. After all, you can have the best microphone, the best microphone preamp, and the best vocalist in the world, but if your audio converters that ultimately turn your recording into a digital signal are low quality, then your resulting audio will also suffer.

Audio converters don’t solely exist on the ‘front end’ when capturing audio—they also exist on the ‘back end’ when digital audio from your computer needs to be converted back to an analog signal, so that your speakers can play it back. Generally, you’ll find that audio interfaces with high-quality audio converters tend to be more expensive.

Every audio interface has what we call a monitoring section. This is usually comprised of a volume knob, a cue output (or headphone jack), and maybe a toggle to switch between different pairs of speaker outputs. Usually, the more monitoring options an interface has, the more costly the interface is going to be.

Last but not least, it’s important to understand the way an audio interface connects with your computer. These days, most interfaces come with USB 3 connectors or USB-C connectors. For most use cases, a standard USB 3 connector should be good enough, but if you need much lower latency (this might come into play if you’re recording multiple inputs simultaneously), then consider going for a connector with a higher bandwidth such as the Thunderbolt connector.

Which interface should you buy?

Audio interfaces range widely in price points, spanning anywhere from under one hundred dollars to a couple of thousand dollars. Realistically, if you’re starting out, it’s wise to grab an audio interface that’s not too expensive, but also affords you the option to build on your setup later on.

If you’re not sure where to start, the Scarlett interfaces from Focusrite that we mentioned earlier are widely adored by hobbyists and professionals alike, have stood the test of time, and generally deliver the bang for your buck. They’re built with high-quality converters and preamps, while often being the go-to economic option across various price points. And as a bonus, we’ve partnered with Focusrite to offer a promo code for three months of free Splice Sounds to anyone who buys a Scarlett interface.