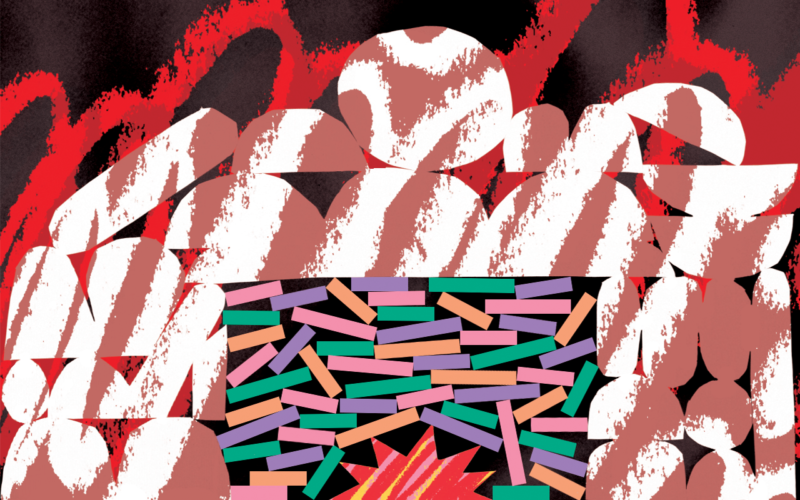 Music theory – perhaps the most empowering yet least approachable stage in the learning process of production.

While most producers would love to learn more about it, a vast majority are alienated by the academic language surrounding music theory and its classical orientation. That said, theory doesn’t need to be intimidating or stuffy! What it needs is to be brought into the 21st century and seen through the lens of computer composition for the modern producer.

Enter Splice’s practical guide to music theory. Cleanly distilled in a succinct session for Ableton Live, FL Studio, and Logic, our crash course in music theory will have you unlocking the basic building blocks of music. Here you’ll learn about modes, chords, and scales, and how to write chord progressions and melodies.

The presentation of this material is particularly well suited to Ableton’s clip view. Here we can see the direct relationships between scales and chord positions in rows (also known in Ableton world as “scenes”).

Of course, this content is neatly mapped to the arrangement views of FL Studio, Logic, and Ableton as well. 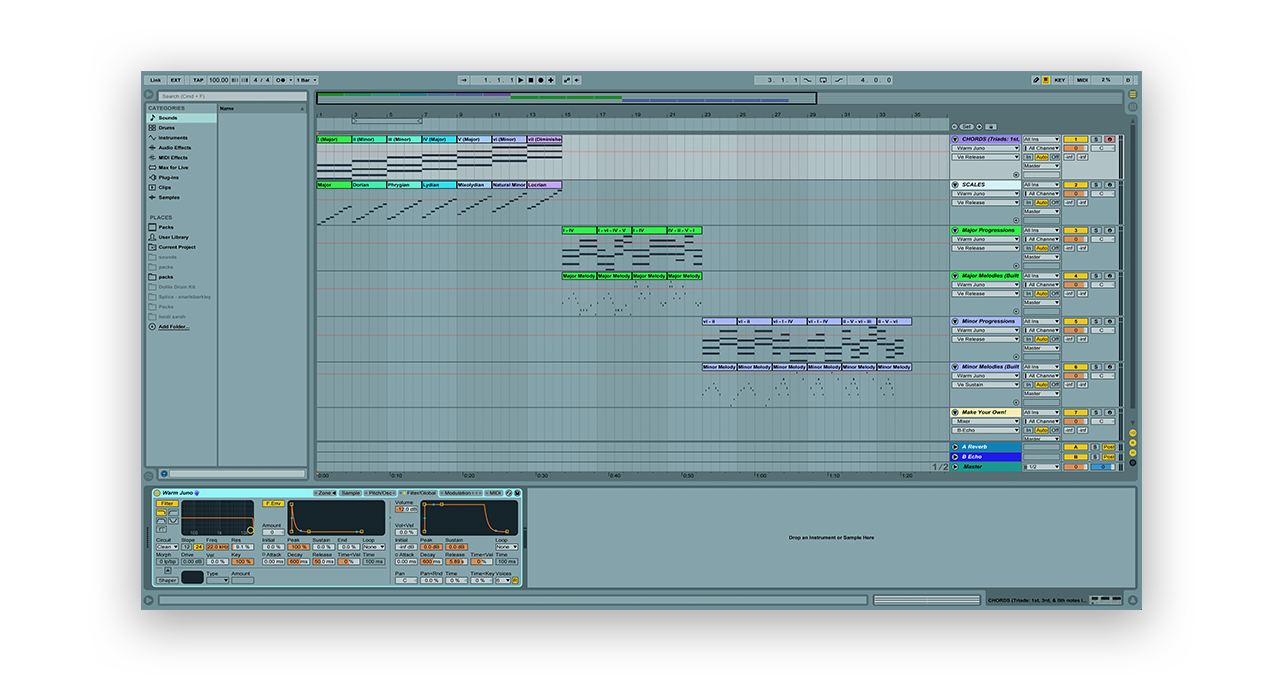 First, let’s discuss one of most fundamental elements of music theory: modes.

Modes are a series of seven unique scales, or sequences of notes, each with its own corresponding chord. Think of modes as moods, ranging from cheerful to dark. Our first mode is the Ionian mode, better known as the major scale. Its corresponding chord is referred to as the I chord. You’ll see that there seven scales / modes and seven chords, which are denoted with roman numerals for their position. 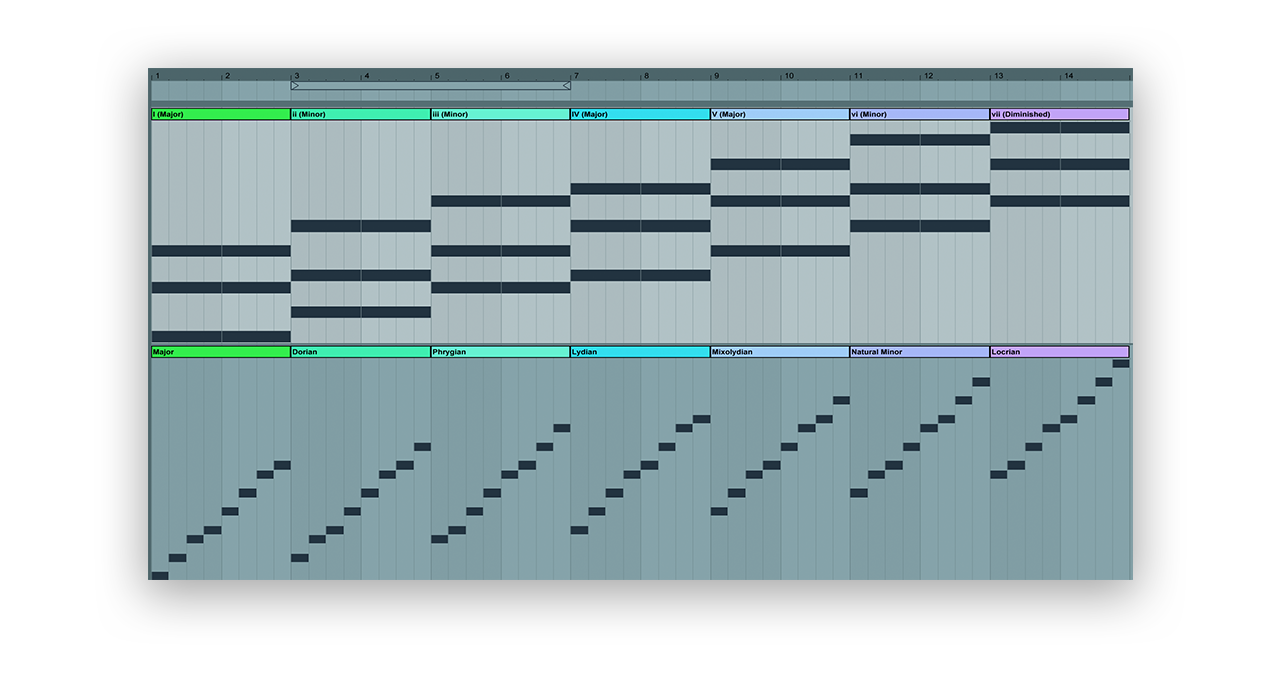 As we investigate our first scale, you’ll find that it has seven unique notes – eight in total, including the octave (a repetition of the first note in a higher register). Each step in the major scale corresponds directly to the root note (or first note) in each chord and scale.

Note: Upon closer observation we find that each scale consists of the exact same notes, but simply begin and end in different positions. That’s because all of these notes and chords are in the same key – in this case, C Major.

Each chord in the seven-step series has a tonality: either major, minor, or diminished. When you hear the word “tonality,” think “mood.” Major is happy and minor is sad. The accompanying session breaks down which chord positions are major and which are minor for you. The I chord is major, the ii chord is minor, and so forth.* This is very handy to memorize, but you can refer to the session as often as you like while you’re learning.

The primary scales and chords are the major scale (I chord) and the natural minor scale (vi chord). In relation to one another, they’re called relative major and relative minor. Think of relative major and minor as yin and yang. The I chord’s dark counterpart is the vi chord, and vice versa.

The vast majority of popular music, be it pop, hip hop, or dance music, is based on either of these modes. We’ve demonstrated some chord progressions and melodies for each.

Once you know the seven-chord system and which chords are major or minor, it’s quite simple to construct chord progressions. Simply choose a sequence of chords I through viiº – there’s no wrong answer! Just mind the tonalities of each – that is to say the I chord is major, the ii chord is minor, the iii chord is minor, and so on.

Writing melodies is equally full of possibilities. Select notes from either the major or minor scale, depending on which tonality you’d like to work in, and sequence them to compose a melody.

Be creative with rhythm, since this can be the difference between an interesting and boring melody.

Tip: The 1st (root note), 3rd, 5th, and 8th (octave) are the strongest, most fundamental intervals in every scale from which chords are built. You can count on these intervals as anchors to begin, end, and resolve your melodies at any point.

The DNA of music is mathematical, but don’t worry – it’s not calculus. Scales are pattern-based, and once their formulas are learned, one can derive infinite melodies without the guesswork of trying out different notes at random. In the figure below, you’ll find that the formulas for the major and minor scales are outlined in whole / half steps and semitones. A semitone is one space on the piano roll. Whole steps are equal to two semitones and half steps are equal to one semitone. 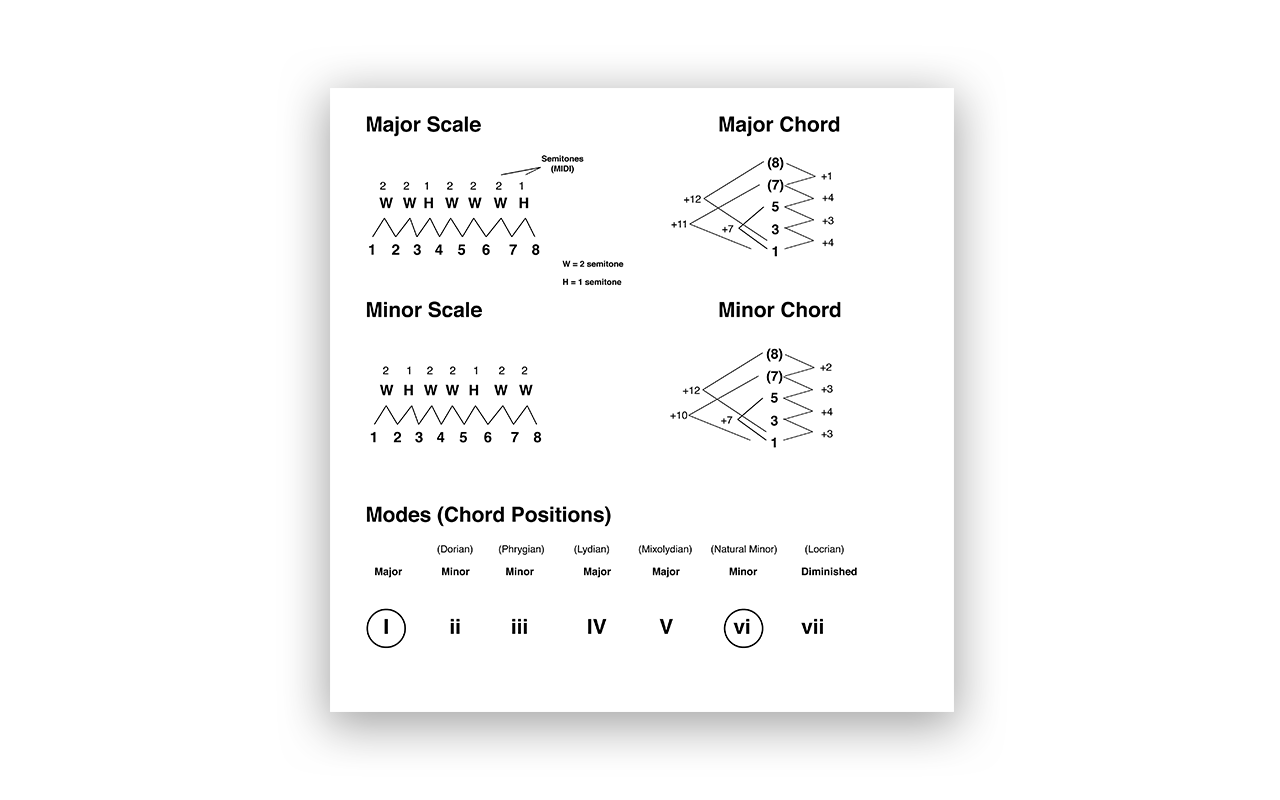 The beauty of scales and chords in MIDI is that their pattern remains exactly the same regardless of where they begin and end, unlike on a piano. That is to say you can convert a C Major chord to a D Major chord by simply selecting all of its notes and dragging them up 2 semitones (or slots) on the piano roll.

Triads are the type of chord used in the accompanying session to this lesson. They are constructed by combining the three most stabilizing, fundamental intervals of a scale: the 1st, the 3rd, and 5th. Refer to the diagram above, which decodes the distance in semitones between the notes in a major and minor chord. This is also very useful to memorize! Pretty soon you’ll be programming chords in MIDI on the fly.

Note: You’ll notice that the only difference between a major triad and a minor triad is its 3rd. The 3rd is one semitone higher in a major chord than in the minor chord. To transpose from major to minor, simply shift the 3rd down one slot on the piano roll!

Thinking outside the (Western) box

It’s important – and all too often neglected – to mention that everything contained in this lesson is music theory from a specifically Western perspective. African, Middle Eastern, and Asian music traditions all have their own unique equivalents of modes and some cultures such as India’s utilize microtones, an interval of pitch smaller than a semitone. That being said, the common ground across cultures is pronounced, from the perfect 5th to the octave. Why all human beings agreed on the sonic gravity around these intervals is a fascinating cosmic mystery that paints an inspiring picture of unity.

Lastly, to all the punks and purveyors of free expression, it’s true: you don’t need to know music theory. Many of the greatest musical minds make sense of these principles in intuitive terms. Consider all of the above to be conventional wisdom pointing in the direction of functional music. These are absolutely rules meant to broken for experimentalists, but these musical guidelines will serve as a language from which you can choose what you want to say and how effortlessly you can say it.

Inspired to create? Share what you make with the Splice community in this week’s Music Theory 101 Firestarter. 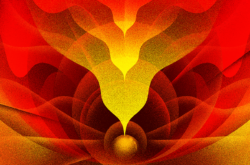 Our Firestarter series kicks off with a chord progression from SZA’s “The Weekend!” Check out this blog post to learn about how you can get involved. 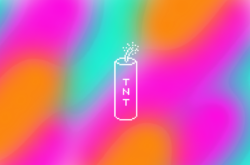 For this week’s Firestarter, we’re asking you to build a build, creating as much tension as you possibly can without composing a drop to go along with it. 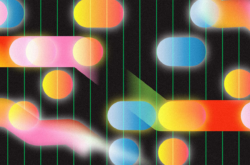 For this week’s Firestarter, we’re looking for the catchiest melodic hook possible, an earworm that won’t get old even after a hundred listens!