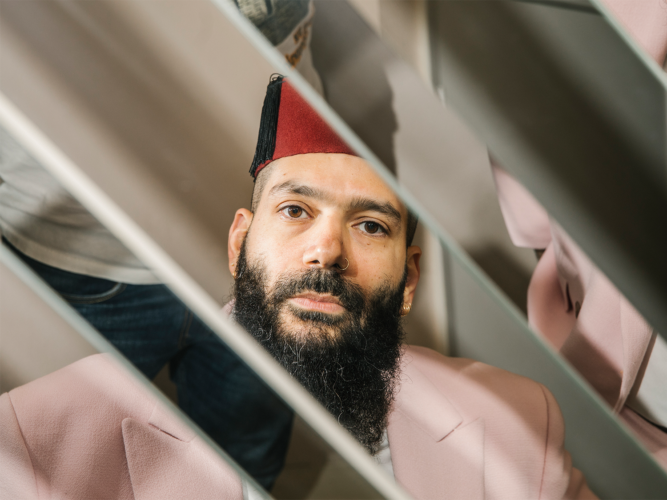 In 1978, Herbie Hancock released Sunlight, an album that delved further into the jazz legend’s explorations of fusion, smooth jazz, R&B, and electro funk. The record is noteworthy for Hancock’s use of the vocoder, an instrument and effect he’d continue to utilize on future albums. Maybe not as noteworthy to listeners but noteworthy for music makers was the back cover. It included a kind of lexicon to Hancock’s music – a list of every synth, piece of gear, and keyboard that he used on the record. For P-Thugg, one-half of electro-funk outfit Chromeo, it was a revelation.

“He listed everything,” P-Thugg recalls. “Not only does he show his setup, but it’s listed in the credits.” Next to a photograph of Hancock’s own stage setup was a rundown of his entire synth and instrument rig, from his Fender Rhodes and Sennheiser VSM 201 to his Minimoog and Yamaha Polyphonic. To an impressionable and young producer, this was his field guide for learning synthesis. “It was all pieces of the puzzle – so this sound is done by this.” 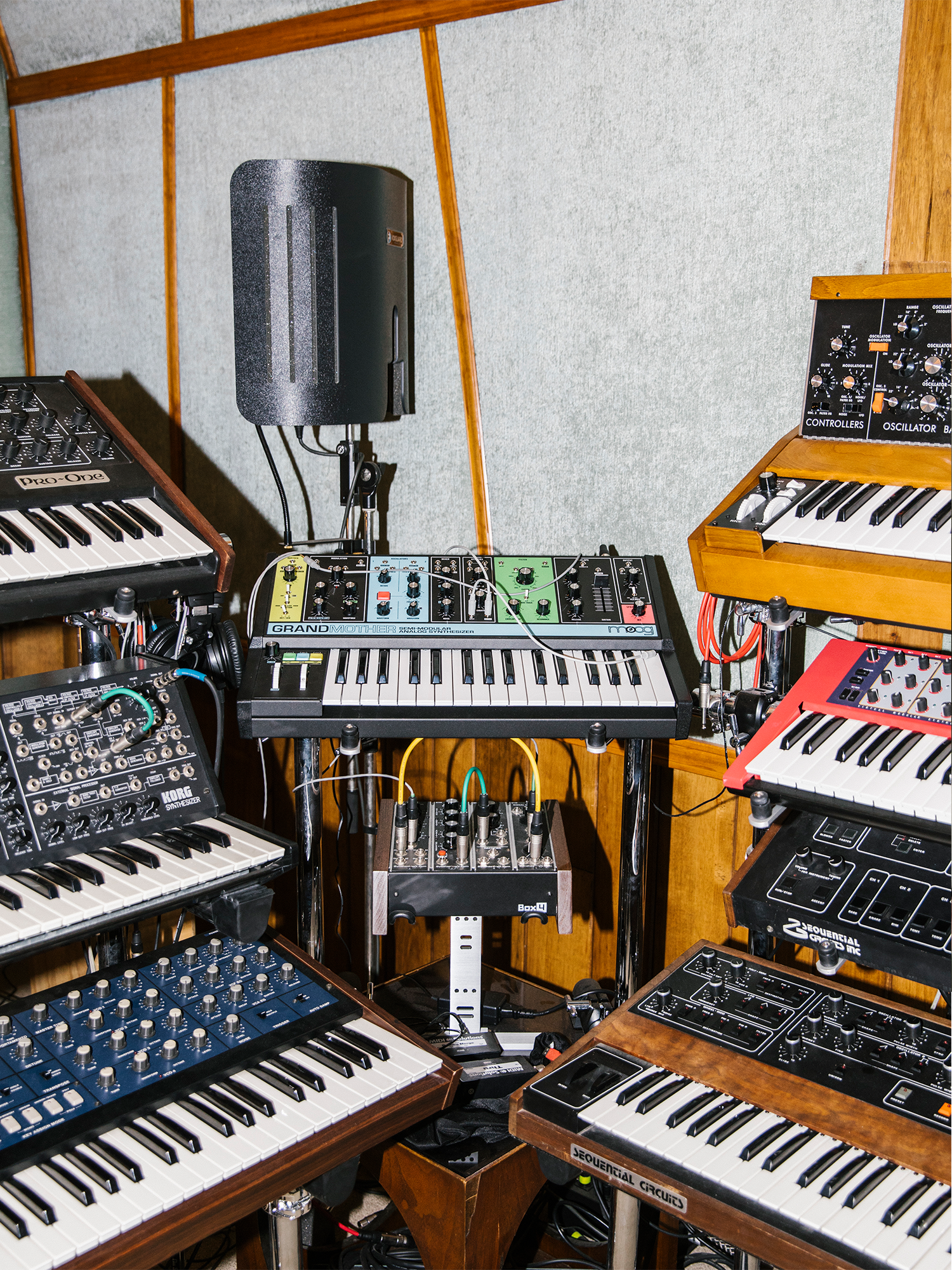 We met P-Thugg at the Private Sector, Chromeo’s studio in Burbank, California. The duo amass a collection of synths, hardware, instruments, and other sonic goods that are enough to rival the back cover of Sunlight. Yet, Chromeo started not in studios but in basements, like the one in Montreal, Canada where high school classmates P-Thugg and David “Dave 1” Macklovitch started their project. “We used to rent this smelly basement garage rehearsal room on Saturday mornings at 9:00 am. Just complete nerds. Throughout high school, we just kept rehearsing, playing, and writing songs. We barely ever played covers. We always played original songs.”

Back then, the duo was primarily writing and recording rock music, but their roots and musical passions originated in hip hop. In his teens, P-Thugg was listening primarily to rap records and playing guitar to samples before knowing what sampling even was. “When I was 13, I discovered my grandmother’s toy guitar. There was a song called “Back By Dope Demand” by King Bee and I picked up the guitar line by ear.” He then researched the track further: “I later discovered the sample for this song, which was James Brown’s ‘Funky Drummer,’ and in my head, I was trying to figure out – ‘how do you make this, and how do you produce music?’” 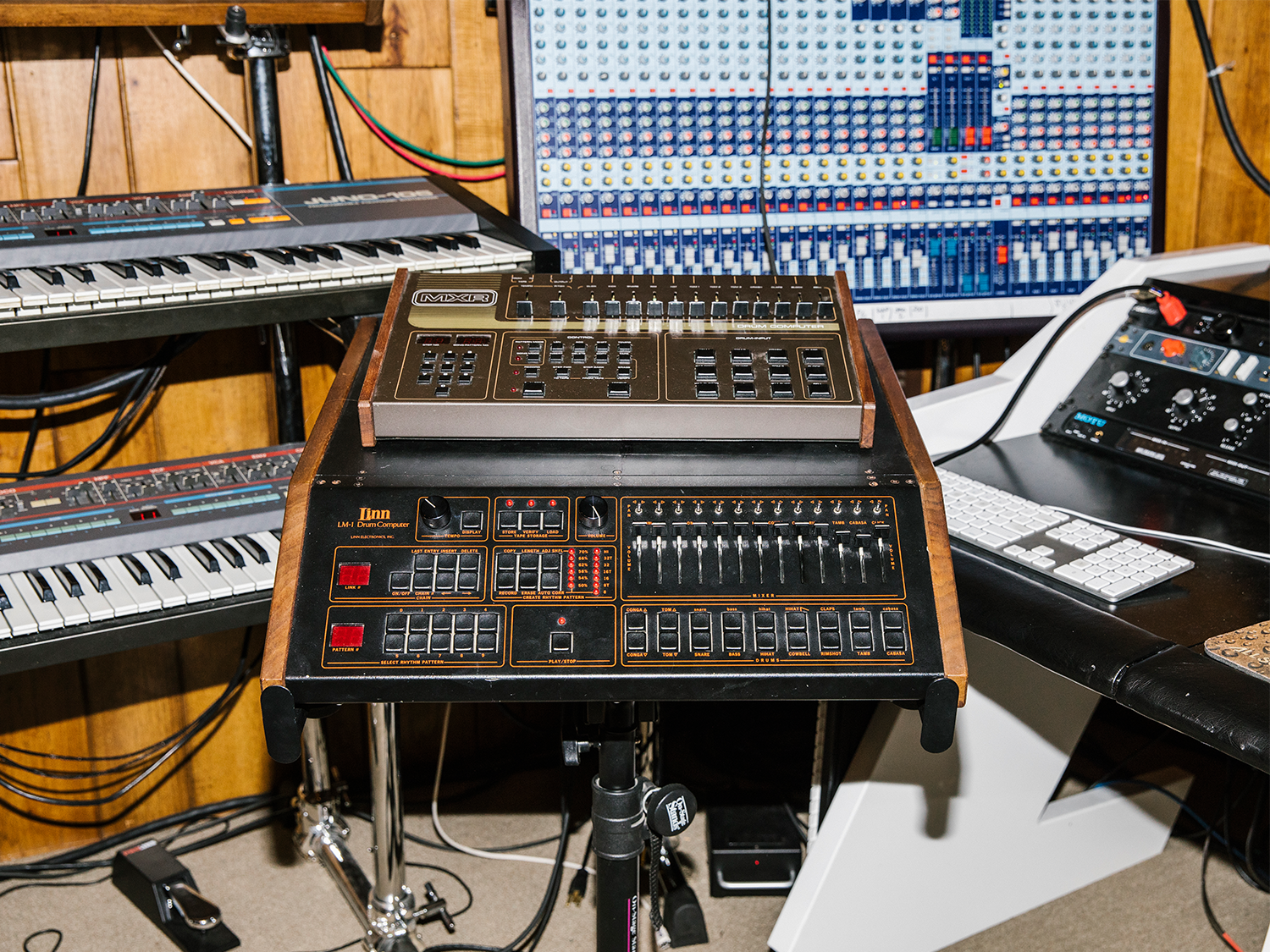 The intro to “Back By Dope Demand” hints towards Chromeo’s later, funkier ambitions. The first few seconds contains a pitched-down sample of Herbie Hancock’s “Wiggle Waggle,” and from there a love of all things funk music sparked, as did the drive to explore the sources of more hip hop samples. “I started buying records, making a catalog in my head of which hip hop songs come from what sample and from what record.”

Although initially bonding over Led Zeppelin and Jimi Hendrix, Dave 1 shared both P-Thugg’s passion for hip hop and interest in production. Maintaining a lineup, however, began to prove difficult. “It’s hard to keep a band going, and the nucleus was the both of us,” P-Thugg explains. “So instead of a full band, we started producing.” He bought an Akai S950 sampler to emulate the “crunchy, dirty drums” of the hip hop records they loved. They experimented with Cakewalk’s software, learning to program their drums and sequence MIDI patterns. Around then, he also purchased his first synth – a Korg Micro Preset 500, a 32-note monophonic synth used by the likes of Jean-Michael Jarre and Brian Eno. “It had three sounds, but it was analog and I could do the portamento G Funk sound on it- I could do kind of a bass on it and I was happy,” he recalls. “Well, these are oscillators in my hands, it’s amazing.” 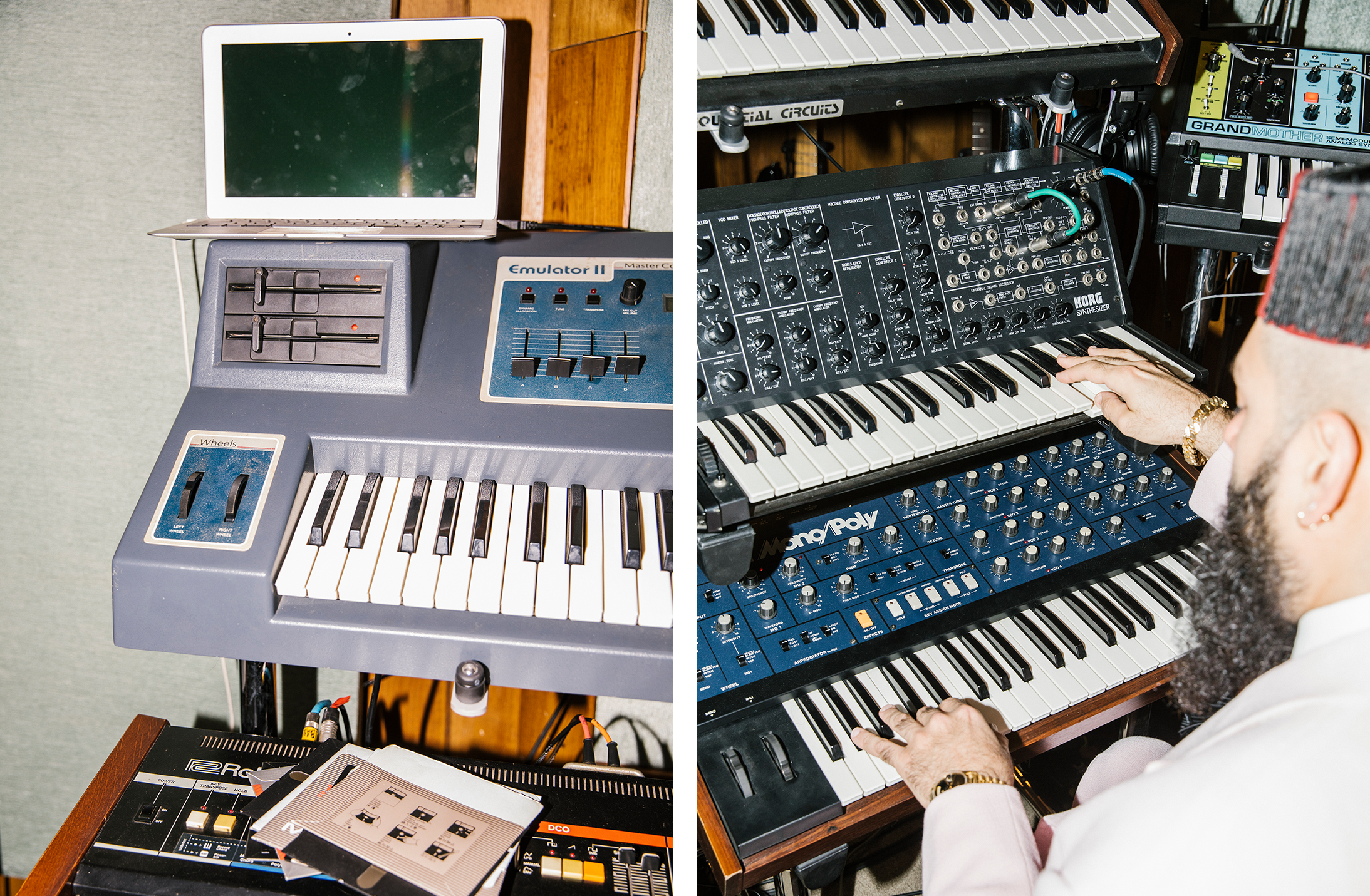 Their musical palette expanded alongside their interest in production as they evolved and incorporated elements of electronic music, funk, jazz, and rock. They dived deep into the repertoires of Daft Punk (“they would use funk samples the way hip hop producers would – it talked to us and touched us in a different way”), Michael Jackson (“’Thriller’ was so clean and well-produced; you can hear all the layers and you can pretty much decipher what’s happening”), and most consequentially, Zapp & Roger. Known for their use of the talk box and influence on generations of G-funk, electro, and West Coast hip hop, Zapp & Roger’s “More Bounce To The Ounce” convinced P-Thugg to buy a talk box and learn how to play keyboard. “I always wanted to be a singer but I don’t have the voice for it,” he explains. “When I discovered the talk box, that’s what made me start playing keys. This allowed me to sing and pour my feelings out.” 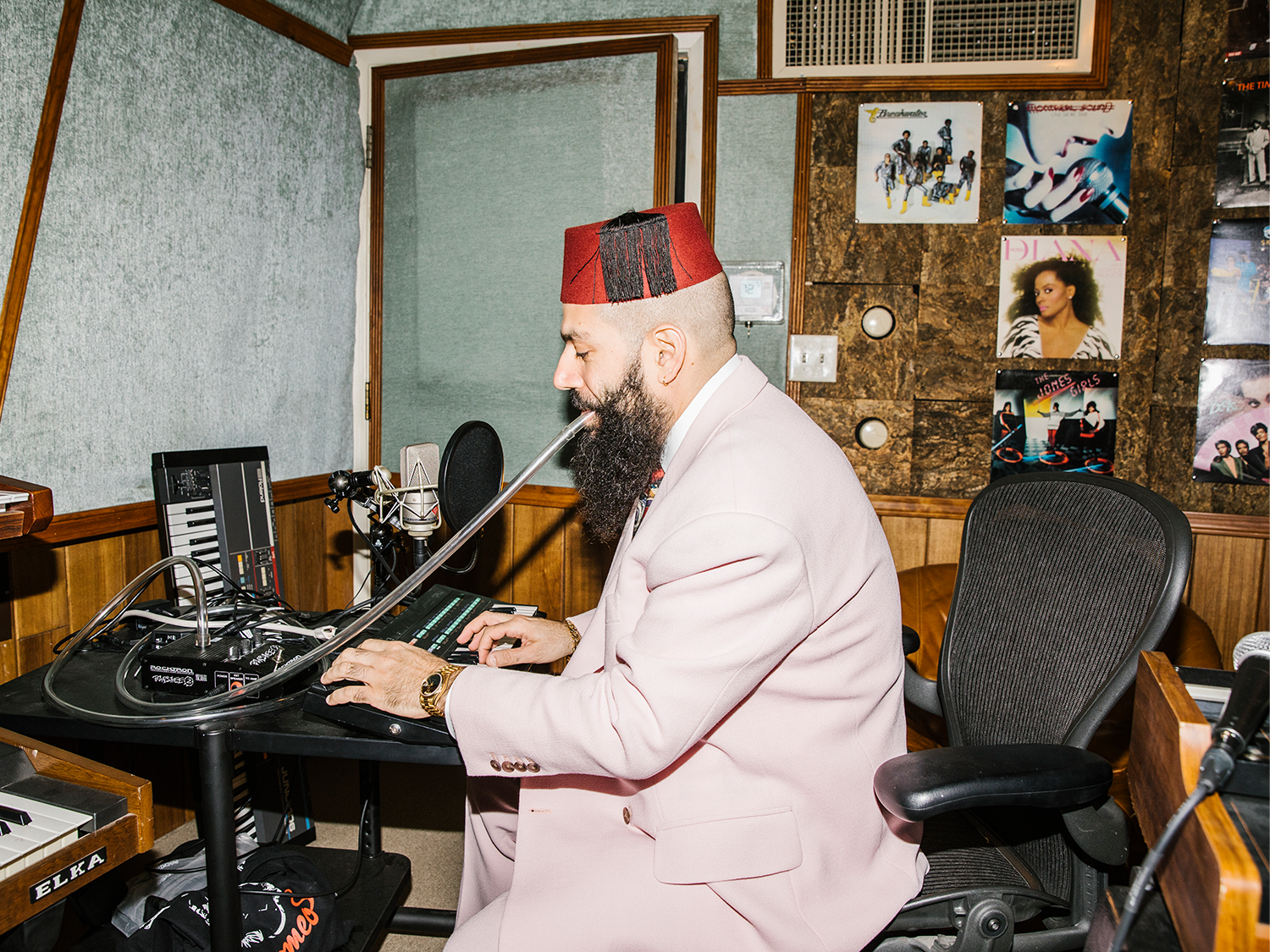 A Rocktron Banshee 2 Talk Box, played through a Yamaha DX100

The Chromeo sound began coming together, a synthesis of live music, sampling, vintage synthesizers, and their signature talk box toplines. They had a throwback sound that payed homage to the 70s and 80s while still feeling fresh and energetic. “The most important thing when you discover your passion, when you discover you want to make music,” he advises, “is having a style.” They eventually linked up with Tiga, a DJ and record shop owner also based in Montreal, who signed the duo to Turbo Recordings. Together they released their debut record She’s in Control in 2004 (including their first hit, “Needy Girl”), followed by their 2007 breakout album Fancy Footwork. After signing to Atlantic Records, they released Business Casual (2010) and White Women (2014), continuing to develop their blend of electro-funk, soul, and nu disco while touring the world. In 2017, the duo decided to relocate studios to Burbank and built the Private Sector, a Batcave for all things synthesizer.

Walking through a series of dark and winding hallways, you eventually enter into a space with wood-paneled walls, lined from floor to ceiling in synths. It feels as if you’ve time-traveled into the past and the future all at once. The back wall of the main studio is comprised of a grid of vinyls that serve as inspiration for the duo, and bits of paper notes cover the surface of the desk. 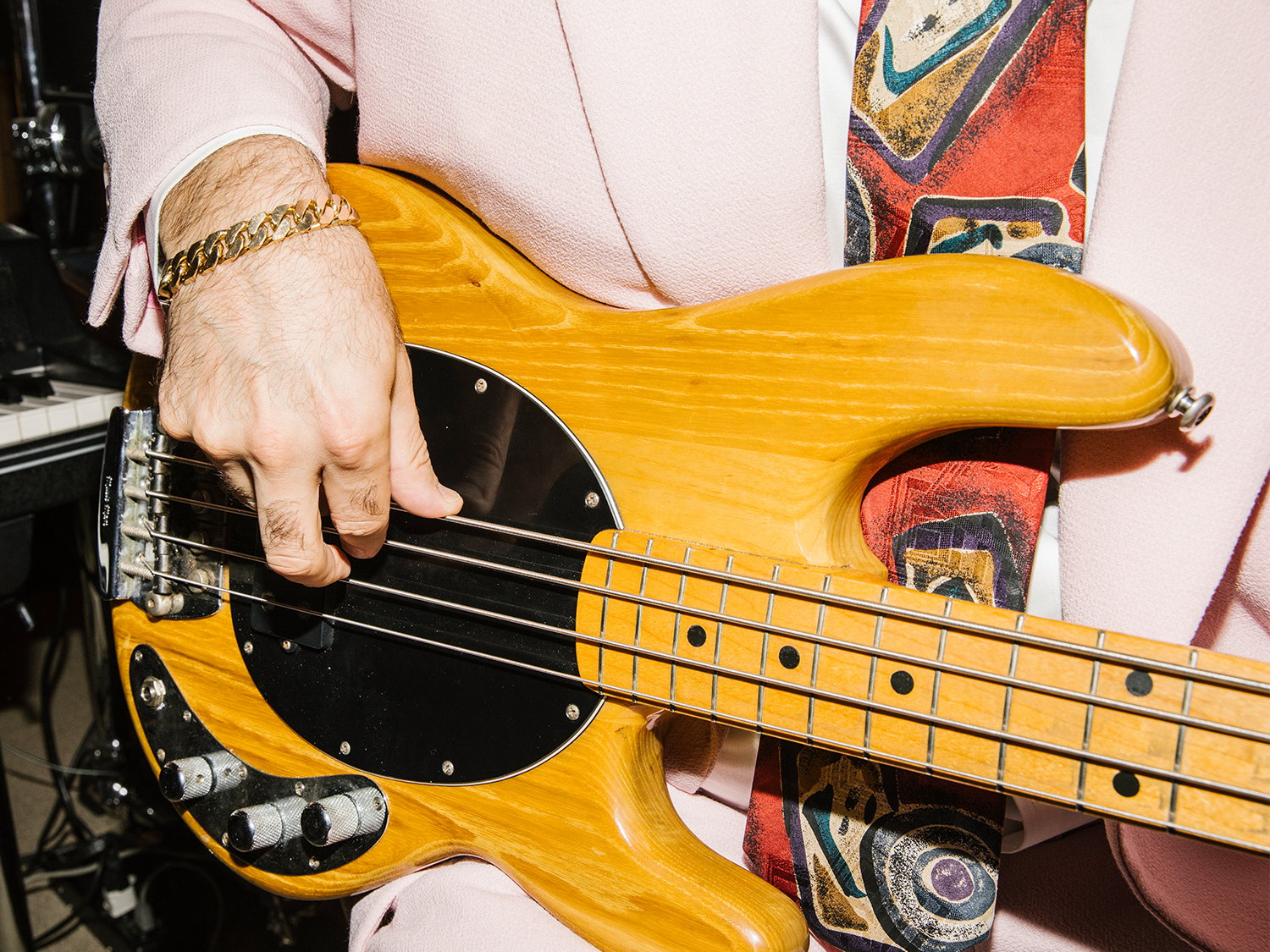 There’s some new (a Moog Grandmother), some old (a pair of Juno-106s), some boutique (a Linn LM-1 drum machine), some small (a Roland MKS-80 rackmount), some enormous (a Midas mixing console), some stringed (a Music Man vintage bass) and of course, their signature sauce (a Rocktron Banshee 2 talk box run through a Yamaha DX100). P-Thugg recalls how the collection began: “It became mostly about sounding as close as possible to our favorite records, understanding what synths did what… that’s where the nerd job of collecting came in.” He elaborates, “It’s a matter of doing research and some dedicated listening. Collecting old records, looking at old videos. All you have left to decipher is which synths they used for what sounds.”

The work between the two Chromeo members is carefully delegated, both contributing production while focusing on different elements of the songwriting. P-Thugg typically lays down a solid foundation, and Dave 1 focuses on crafting melodies and hooks. “I’m usually the guy who’s silent,” he explains. “I’ll usually start chords, chord progressions, etc. I’m not so much of a melody guy – that’s mostly Dave’s department.” He goes into a track already knowing the exact kinds of sounds they want to approach. “I’ll usually already have an aesthetic to the production in my head, and then all that’s left is to find the right sounds and go through the banks on the synths.” 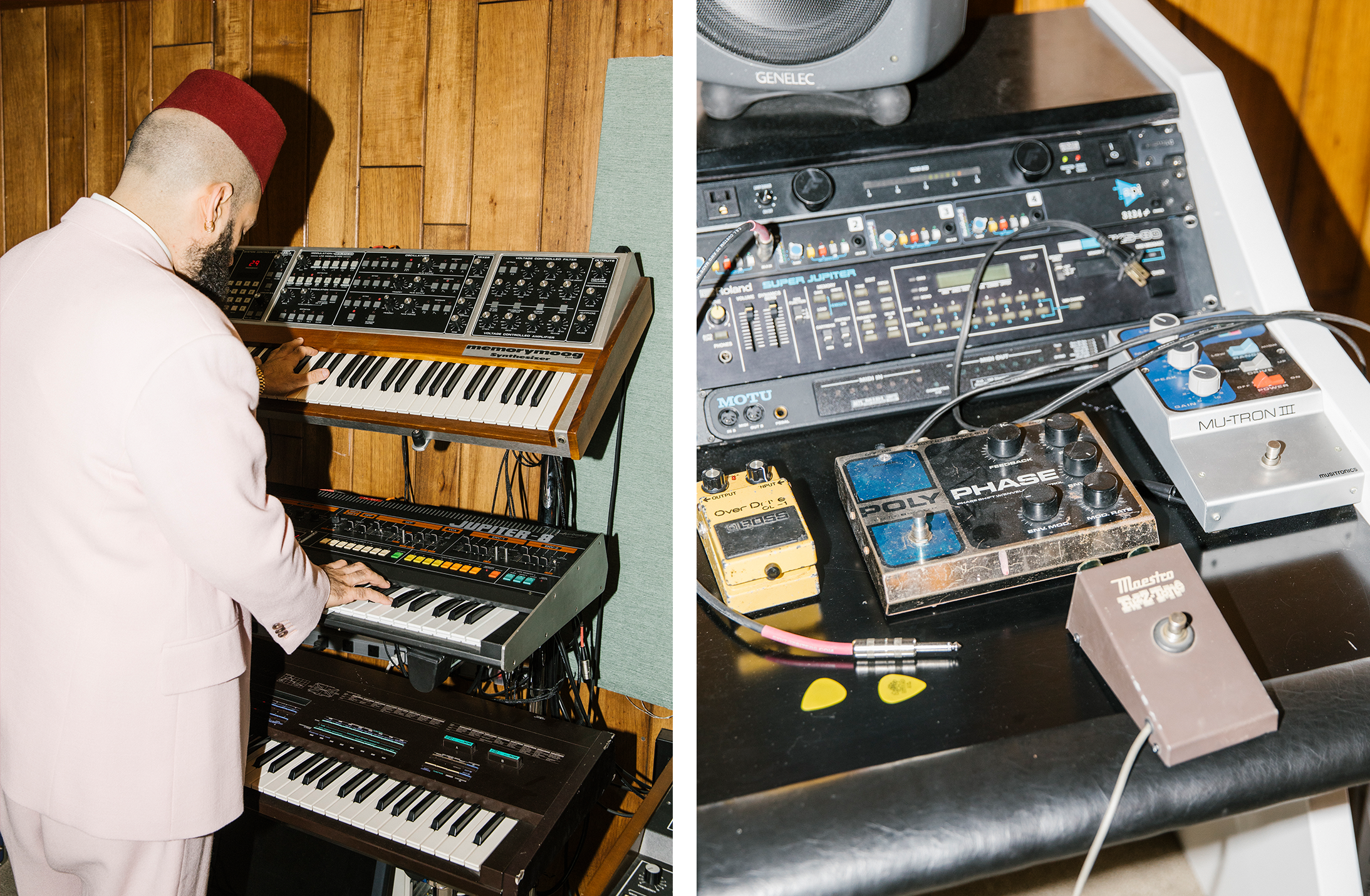 From top to bottom: A Memorymoog, Roland Jupiter 8, and Yamaha DX5 (left), and an Electro-Harmonix Polyphase, Mu-Tron III, and Maestro Fuzz Tone (right)

Having such a collection necessitates getting to know every nook, knob, and preset for each synthesizer. Doing so allows you to hear a sound in your head and know exactly which synth you need to use to achieve it. “I know all these synths by heart,” P-Thugg tells us. “I’ll usually know – I want a Syntex pad on this, or I want the Korg Mono / Poly bass or the Memorymoog lead on this.” An idea for a track could come down to two synths with seemingly identical presets. For example, “If I want a clavinet sound,” he explains, “I might want it from the Memorymoog and not from the Prophet-5. The texture is different and the quality is different.”

For the past century, synthesizers have represented all things new, exciting, challenging, and rule-breaking about creating music. They exist as both a time capsule for generations of music makers past and a taste of the future – just think about what new sounds, songwriting techniques, and experimentations await in every module. It’s evident that P-Thugg’s passion and knowledge for this equipment runs far deeper than being a fanatic collector or replicating old records. “I just see these things as living people,” he explains. “It is a voice. Sometimes the oscillators don’t want to wind up and they’re just not having it. They make a sound that’ll never appear again, on that same synthesizer on that same patch. That’s what gives you the soul of the synth.” 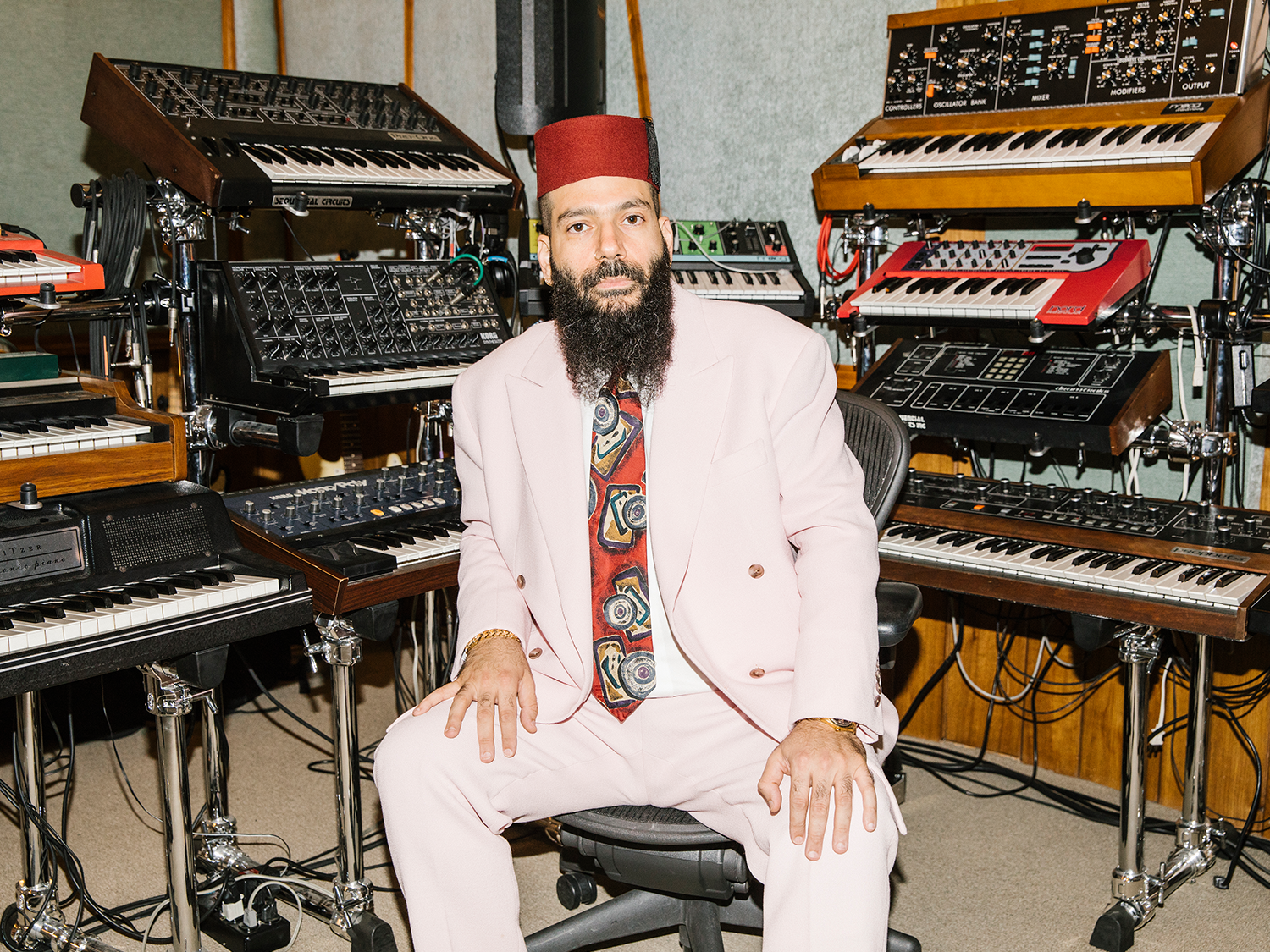 A bit of each of these synths find their way into “Chromeo: Analog Catalog Vol. 1,” their first sample pack. The kit, with over 500 of Chromeo’s signature sounds, provides a glimpse into their studio, not unlike the back cover of Hancock’s Sunlight. There’s a bit of Memorymoog, a bit of the Korg Mono / Poly, some Music Man bass loops, and much more. “I’m like an artisan cheesemaker,” he laughs, “who made the cheese in his backyard.”

He considers the pack an homage to their lifetime of collecting synthesizers, and is particularly proud of the talk box samples. “Having the talk box on there was really important because it’s one of the Chromeo trademarks.” He calls the pack a gift to his 13-year-old self, who was just learning about synthesizers and sampling for the first time. “If I had this as a kid, I’d think… Wow, amazing.” 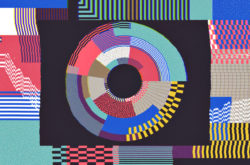 Tips for creating your own sample pack

Here are some tips and tricks to help you be creative, organized, and professional in making your very own sample pack. 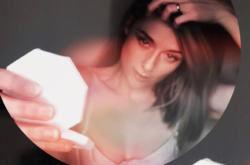