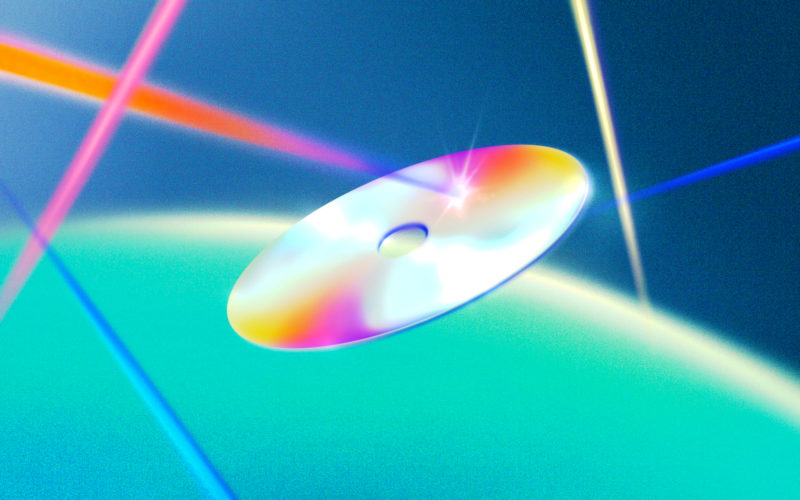 These thin discs have been around for a while and maybe aren’t quite as revolutionary as they used to be—but did you know that there are lasers involved?

Every time you’ve popped one of the above into your computer, DVD player, or video game console, a small beam of light is being used to grab digital data directly from the disc’s surface and convert it to music you can hear and images you can see. Lasers are also used to get all of that information onto the disc in the first place. Let’s explore how this whole process works, as well as how optical media has evolved over time.

Lasers are light, but better

All compact discs depend on something called optical technology, which covers anything related to light being applied in a certain way to accomplish something. If you have a fiber-optic internet connection for example, you’re actually taking advantage of light and its ability to travel through long glass or plastic fibers without hitting the same kind of interference that regular electrical signals do when traveling through metal cables. Lasers are especially useful because they emit a super-focused beam of light that can be used in some really sophisticated ways, from laser cutting and printing to fiber optics and surgery.

Before the invention of the first CD, the most common methods of storing music were vinyl records and magnetic cassette tapes. These analog formats are prone to physical damage, interference, and wear out over time, which negatively affects sound quality. CDs eliminated any direct contact between the storage medium and the playback device by using a low-power laser instead. Discs shouldn’t wear out as long as they don’t get scratched, and it’s much quicker to skip between different tracks on an album, not to mention all the benefits that come with storing audio as digital data rather than analog. It was truly a game changer, but back to the important part – where exactly do the lasers come in?

When it comes to CDs, lasers perform two very important functions: reading data and writing data. Let’s start at the beginning of the manufacturing process, in which a ‘master’ version of a disc is created. A laser is used to transfer digital data (a long sequence of ones and zeros) to this disc by literally burning small ‘pits’ into the surface, with untouched areas (called ‘lands’) representing ones and burned areas representing zeros. This microscopic process happens around and around the disc in a long spiral containing tens of billions – yes, tens of billions – of these pits! If straightened out, this spiral would stretch for miles. A completed master can then be used to print out a massive number of plastic discs, which each receive a thin layer of aluminum (to reflect light), protective coatings, and finally the top label.

Even more magic happens once one of these discs goes inside a CD player. A small motor spins the disc at high speed and a semiconductor diode laser begins scanning along the shiny underside. Those untouched lands on the disc’s surface will reflect the light back up, while pits cause the light to scatter. Whenever the laser light reflects back up, a photoelectric cell is there to detect it and generates a binary ‘one’ while sending out binary ‘zeros’ when nothing comes through (as is the case with the scattered light coming from pits). In this way, the playback device receives all the digital data it needs to reconstruct the sound and music you hear on your speakers or headphones.

CDs and DVDs and Blu-ray, oh my!

Because CDs deal with digital data, they’re not limited to just storing music and audio. Anything digital can make its way onto an optical disc as long as there’s enough space, and boy have there been some advances there. The very first audio CDs introduced in the 1980s gave way to the CD-ROM (read-only memory) which could store up to 700 megabytes of data – the equivalent of a few hundred floppy disks! As optical technology continued progressing in the ’90s, we got the Digital Video Disc (a.k.a. the DVD) which boasts a capacity of around 4.7 gigabytes due to shorter-wavelength lasers that can read smaller lands and pits. The Blu-ray standard, launched in 2003 and named after its even more precise blue laser, can hold up to 50 gigabytes of data. More advanced formats like DVDs and Blu-ray can also store information on both sides of the disc, and can even store more than one layer of data on a single side (the reading laser can choose which layer to scan).

While using compact discs to store high-quality media like video games and movies is still common practice, things aren’t looking as bright for music CDs. In 2020, CDs were actually surpassed in sales by vinyl records, one of the formats they were meant to replace (meanwhile, the popularity of all-digital music consumption via streaming platforms continues to grow).

When’s the last time you played music on a CD? Do you think they’ll ever make a comeback? Let us know in the comments below.