How to recreate songs by Daft Punk, Kanye West, and more using VocalSynth 2 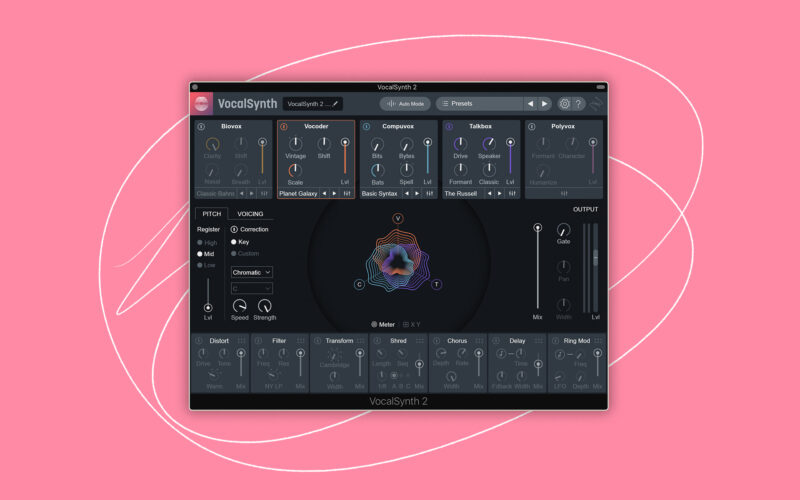 What do Daft Punk, Kanye West, and Kavinsky all have in common?

Honestly, quite a bit. Not least among their commonalities is a predilection to using idiosyncratic vocal effects that were previously difficult and expensive to achieve. In this article, we’ll show you how to recreate unmistakable vocal effects from four of our favorite instant-classic tracks, using nothing but a copy of iZotope’s VocalSynth 2. We’ve also included the complete VocalSynth 2 patches for each track at the very end of this blog post.

Daft Punk’s “Around the World”

Daft Punk’s vocal lines are the stuff of legend. It’s not easy to get a human voice to sound as clean as the beloved robot voices that cement the French duo’s spot in the EDM Hall of Fame.

It sounds to me as though the original version of this classic vocal was recorded using a Heil talkbox, modulating a Yamaha DX7. It’s going to be a challenge to use digital tools to achieve a sound as clean and warm as a real talkbox and a vintage synth, but I gave it my best shot using nothing but VocalSynth 2 and Ableton’s stock effects.

This is actually quite a simple VocalSynth 2 patch using only the Talkbox module. I’m not distorting the signal through Talkbox, or shifting the formants at all. I’ve got it set on Bright mode and the Speaker set to 100 to apply the maximum amount of talkbox convolution (translation: to simulate a real talkbox pedal). There’s also some light pitch correction going on because I’m not the world’s best singer. 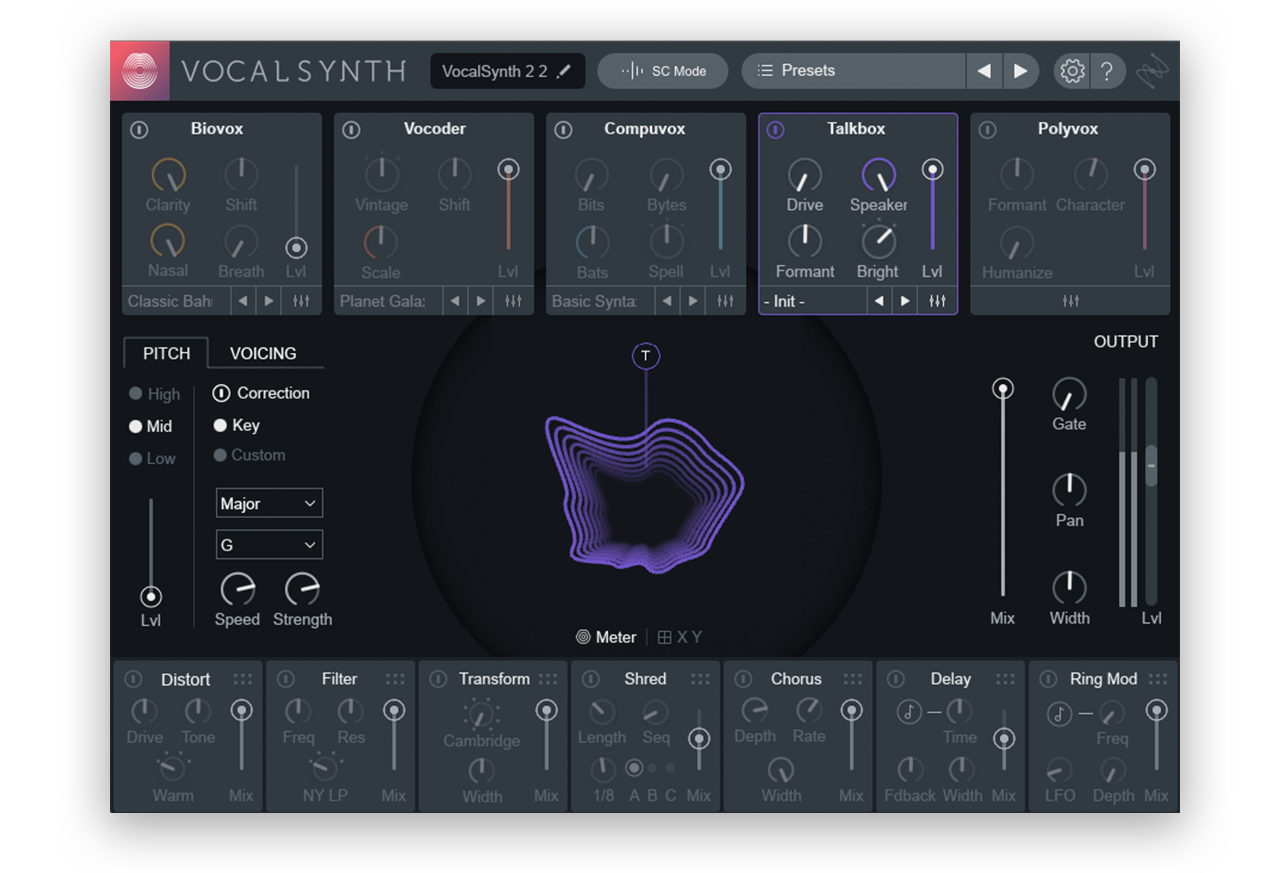 VocalSynth 2 settings for “Around the World”

Since we’re in the Sidechain mode, we’re modulating the sound using an external signal instead of the synth generator from the Talkbox’s Advanced View. Here’s the external signal I’m using:

The MIDI pattern running through Operator to modulate the vocals

The Operator patch being used as a source signal

This simple Operator patch uses a SawD waveform to generate plenty of high harmonics. A gentle high-pass filter starting around the low mids helps remove bass from the signal so that the rest of the instrumentation can cut through. There’s really not much else to this patch (except that I set the Coarse ratio to 0.5 to transpose the notes down the octave).

You might recognize Kavinsky’s “Nightcall” from the movie “Drive,” or perhaps from Kanye West’s “Wolves.” This instant synthwave classic was featured on Kavinsky’s debut album. Interestingly enough, Guy-Manuel de Homem-Christo of Daft Punk earned production and songwriting credits on the track. While information about who did what isn’t readily available, it’s not a stretch to believe that Kavinsky may have recruited the robot superstar for help specifically on the lead vocal effect. Let’s see if we can remake it using VocalSynth 2.

Here, I’m using the Vocoder module in Vintage mode to get that classic melodic effect out of my spoken vocal performance. I’m also adding a layer of Compuvox processing and distortion to give the sound its gritty, raspy character. 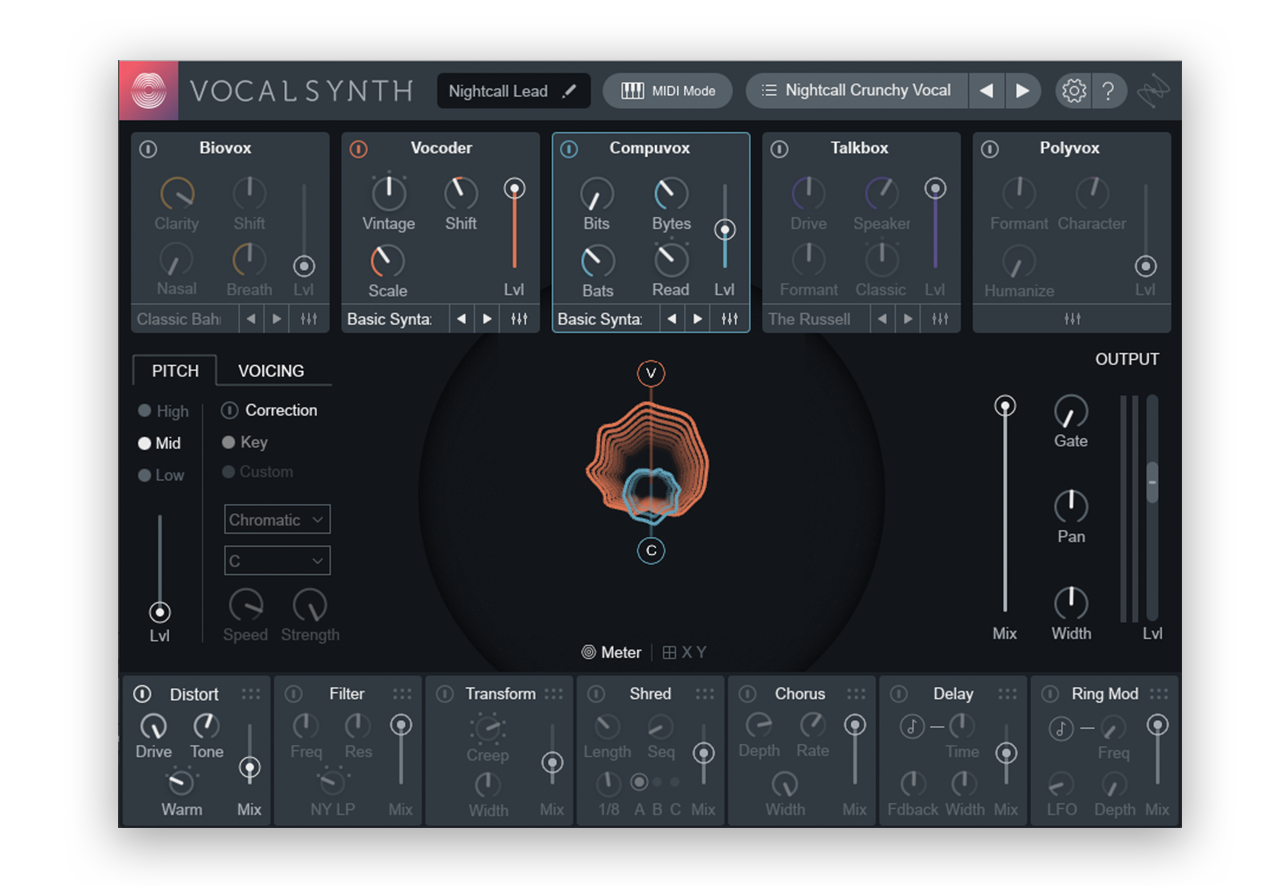 VocalSynth 2 is in MIDI mode, so we need a carrier MIDI track. Here’s what that track is playing:

The chord progression from “Nightcall” going into VocalSynth 2: Am – G/B – F – Dm

The Advanced View of Vocoder

The modulator waves in this patch are two stacked squares and a lot of noise, with some of the lower frequency bands attenuated. The square waves are an octave apart to add a nice, thick body to the sound.

The Advanced View of Compuvox

Over in the Compuvox module, we see a high-pass filter taking out the unnecessary low end information while white noise is used again to modulate the vocals. I won’t try to explain the exact differences between Bits, Bats, and Bytes as defined by iZotope, but I’ll tell you that dialing in a little bit of Bytes and Bats worked nicely for this patch.

Say whatever you will about Kanye West, but the man’s production instincts are undeniable. On intense tracks like “BLKKK SKKKNHEAD,” Kanye has been known to transform his own voice into a fuzzy melodic lead sound that would make Dimebag Darrell jealous. My favorite example of this classic effect actually comes on the outro of “Runaway,” which features Kanye humming or scatting an evocative vocal line over a tender piano and string accompaniment. This effect is characterized by an intense pitch correction setting coupled with some serious distortion—well within VocalSynth 2’s capabilities. 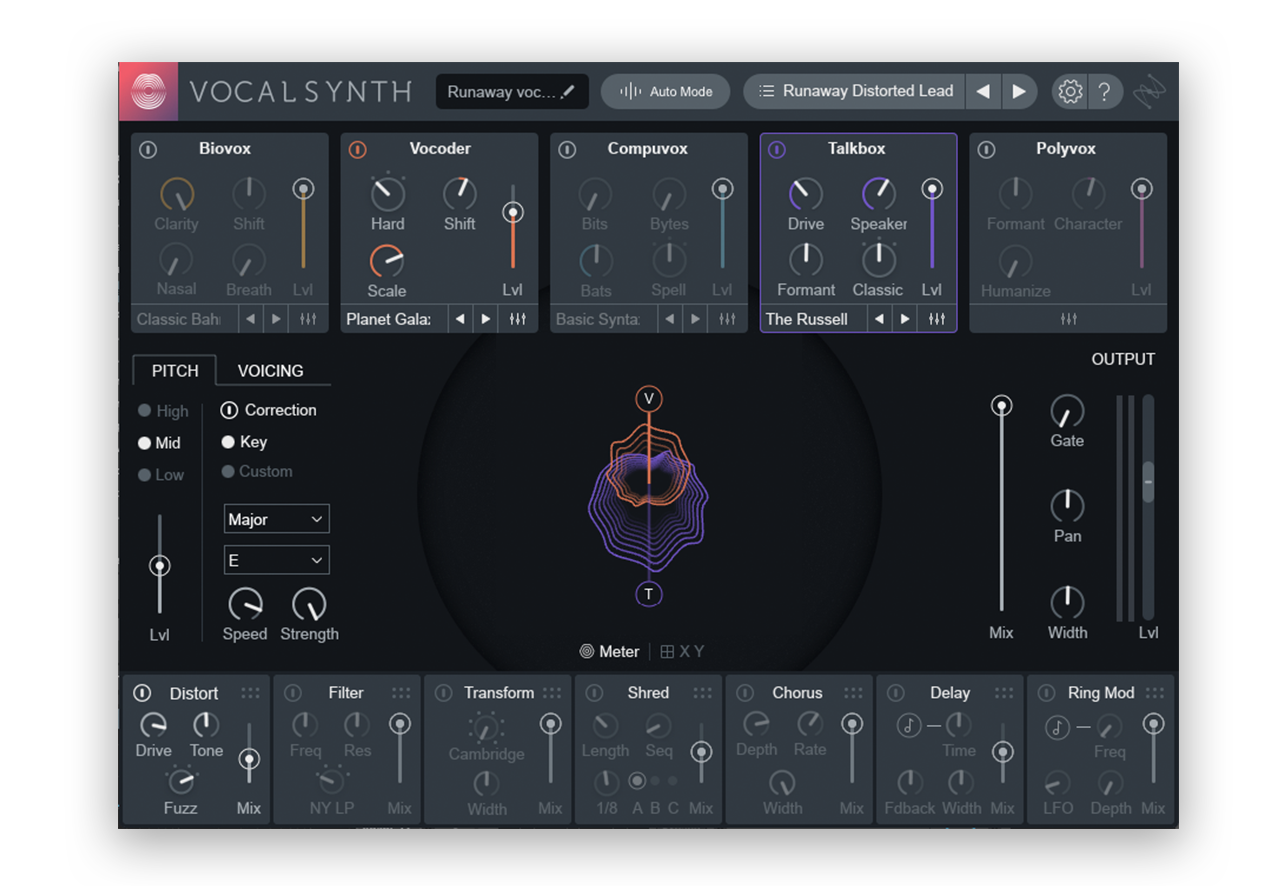 Although the distortion and pitch correction modules are doing most of the work here, Vocoder and Talkbox are adding some nice synth flavor as well. Note that I’ve added a suboctave signal generator to both modules to add some extra body to the sound.

The Advanced View of Talkbox

The Advanced View of Vocoder

We’re in Auto mode here, so no MIDI or sidechain audio track is necessary. After applying strong, fast pitch correction to E Major and fuzzing up the signal with distortion, we’re left with a nice buzzsaw of an electric vocal lead.

Bon Iver’s “Woods” was a standout final track from the band’s 2009 EP, Blood Bank. It stood out enough to Kanye West, in fact, that he sampled the track and contacted vocalist Justin Vernon to re-record some harmonies for the introduction to “Lost in the World.”

Just for fun, I did my best to recreate the My Beautiful Dark Twisted Fantasy version using VocalSynth 2. This is a really simple VocalSynth 2 patch; it only uses pitch correction and Polyvox for some extra character. The most difficult part of this was stacking layers of vocal harmonies, as you’ll see in the video below. 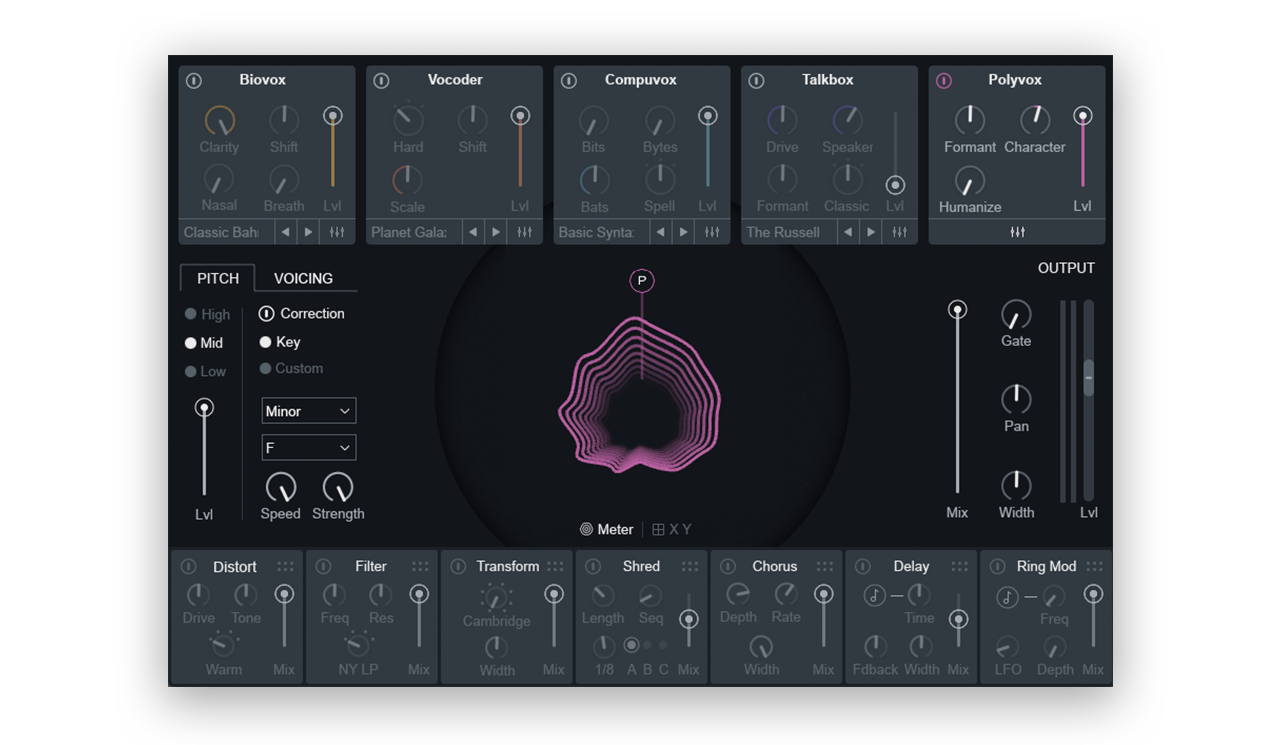 Keep in mind, it’s still difficult to achieve the iconic sound of Vernon’s warbling—it requires some serious vocal talent to really nail this. Lacking that, it took plenty of takes for me to get this done, and I ended up with seven different vocal tracks. There’s not much tweaking of VocalSynth 2 needed here, but you do want to be careful to adjust the High / Mid / Low register setting on each track to the relevant pitch. It’s pretty straightforward—when singing in a head voice or falsetto, use the High pitch option. For low-pitched voices or others singing with a chest voice, try putting the selector on Low. Typically, Mid should be okay.

This concludes our recreation of some iconic vocal effects using VocalSynth 2! If you have any questions, leave them in the comments below, and click here to download the final VocalSynth 2 patches for each of the songs.

Try VocalSynth 2 for free, and then Rent-to-Own the plugin for $9.99/mo until you own it outright:

Want access to Sounds, Skills, and more? Start a new Rent-to-Own trial and get a code for your first month free on a new Splice Plan:

Got your code? Choose your plan 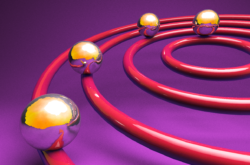 How to use iZotope’s VocalSynth 2

This feature guide explores iZotope’s VocalSynth 2, a plugin that allows you to elevate your vocal track from great to epic. 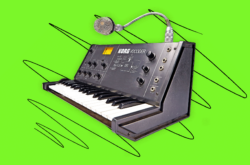 What is a vocoder? How to use vocoders in your music

Learn about what a vocoder is, how the effect works, and how you can apply vocoding in your own music with plugins. 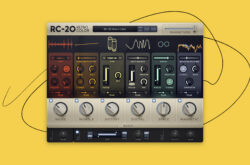 Producers / educators Bad Snacks and J3PO give us an inside look into how they use RC-20 in their own creative processes.