What is music copyright? | Hollis breaking down the music biz

Music copyright is a rarely mentioned but fundamental concept upon which this whole business is built.

In Breaking Down The Biz, we take key concepts related to the music business and break them down into bite-sized chunks. We hope to cover international perspectives in future entrees, but note that our discussion today primarily revolves around U.S. music copyright, and that nuances may change depending on your country. With that in mind, watch the video above for our full walkthrough on today’s topic, and read on for highlights.

First of all, what is copyright? Copyright is a type of intellectual property. Usually, when we think of property, we think of a house or a car. But a song is property too—just intangible, a creation of the mind. And just like a house or a car, you can also own a song, and that song has value. But how does that ownership shake out?

Copyright is born the moment that a “creation of the mind” is made tangible, defined by two qualities: original and fixed. First, it has to be original, or in other words, made by you and not derivative or based off of another work. I can’t just add my own lyrics to an existing melody; I have to create something of my own. Secondly, it has to be fixed. This means it’s not good enough for a song to just be in your head. Rather, it needs to be in a format that can be referred to by others. That can be as simple as a voice memo you sang into your phone, or as elaborate as an orchestra recording.

The two types of music copyright

There are two types of music copyright, making 200% of a song: the compositional copyright and the sound recording copyright.

How can there be 200% of something? I think that it’s easiest to understand this by recognizing that a song is in essence two things: the song as it’s written, and the song as it’s heard and experienced. Technically, it’s two halves of a single whole. But, because these two copyrights are so distinct in what they are, how they’re owned, and who controls them, I think it’s best to think of them as two separate entities.

The compositional copyright (the first 100%) is often referred to as publishing. This refers to the song’s composition, sometimes described as the lyrics and melody, which might be a deceptively simple way to understand it today. If I write a song completely on my own on the piano, I own 100%. But, if I co-write a song with three friends, the four of us own the song, typically 25% a piece. If you contributed to an original composition, you should own copyright.

There are no clear rules to how compositional copyright ownership is divided. Many music creators will simply decide that in the spirit of collaboration, every person who contributed to the composition deserves an equal share, or that copyright ownership is distributed pro rata. For example, If I’m in the room with three other writers and we write a song start to finish, I would assume that I’m walking out of there owning 25% of the song. If it’s later decided that part of the song isn’t strong enough, and a fifth writer is brought in to make it stronger, I would assume that that fifth person will be receiving a percentage of ownership as well. How much they end up receiving is definitely based on communication and relationships.

Compositional copyright in the real world

There are countless fascinating stories about how compositional copyright is decided and divvied up (we explore a few in detail in the video above). There’s Dolly Parton refusing to give up her copyright for “I Will Always Love You” back when that was standard, and landing a generational smash hit twenty years later when Whitney Houston covered it for The Bodyguard. There’s the complicated controversy of “Blurred Lines” that pit Robin Thicke and the other copyright holders against the estate of Marvin Gaye. It gets juicy! But for now, let’s move on to our other type of music copyright, the second 100%: the sound recording copyright.

The sound recording copyright is often referred to as the master, or the master recording. A master recording is made when a composition is written, recorded, mixed, and (surprise!) mastered. Unlike compositional copyright, master ownership is generally owned by one entity, which is traditionally either an independent artist who owns their own master, or a record label who paid for its creation and distribution.

Many people are familiar with the concept of “points” on a record, which translate directly to the royalties that one is owed (one point equals one percent). But, a primary difference between compositional copyright and sound recording copyright comes in the ownership, or the lack thereof.

Even if you have points on a master, it doesn’t mean that you actually own a percentage of the master in the same way that you would if you were a songwriter on the composition side. To say that again: points are not equity! Points determine your royalty or revenue share, and even then, it’s usually net revenue, after all expenses—from recording to marketing—are recouped.

The implications of signing to a label

If you create and distribute your own music, you’re an independent artist, and you control the entire master—100%. If you sign to a label, they’re entering an agreement with you about creating masters together, which means they own the masters. They may give you an advance and / or pay for recording expenses (it can get expensive, trust me). But, what they typically get in exchange is full control of the master recording, and the ability to sell it.

Some savvy artists today find ways to make deals with labels in which after a certain threshold, ownership of the master recording reverts back to them—but it’s certainly not the norm. There’s so much more to say about label deals and master ownership, but we’ll do that in another entry.

One way to understand copyright in action is through sampling. The act of sampling means taking one song—a copyright that someone owns—and incorporating it into the creation of a new song. If you’re using the master recording, like literally using a clip of the original song in your work, you’re using a song’s compositional and master recording. Hip hop as a culture was birthed from the art of sampling, taking clips from vinyl records and flipping them to make something totally new.

On the other hand, if you refer to a song’s melody or lyrics in a new work, that’s still sampling, even if you don’t use the literal song itself. For example, Ariana Grande’s “7 rings” heavily uses the iconic melody from “My Favorite Things.” “My Favorite Things” was written by the legendary Broadway duo Roger and Hammerstein, who are no longer alive, but whose publishing is controlled by Concord Music Group. Therefore, Concord had to clear the usage of the melody, which they did, for a cool 90% of the total composition of Ariana’s song.

By the way, “My Favorite Things”—and all songs—will eventually become public domain, which means nobody owns it and everyone can use it. The law was recently updated so that a copyright converts to public domain 95 years after a song is released (or 120 years after recording, whichever comes first). So, feel free to sample “Happy Birthday” to your heart’s content—it’s public domain.

Royalty-free samples, like the sample packs on Splice Sounds, means that the creators have have intentionally made their sounds available to be sampled and re-worked without the obligation of paying a royalty. Therefore, if you alone make a song with a Splice sample, you still own 100%, and don’t have to worry about paying out an additional copyright holder.

If there’s one thing I can underscore, it’s this: copyright belongs to the creator until they say otherwise. You don’t have to register your songs with the U.S. Copyright Office for a copyright to be made, and you don’t have to sign a contract to legitimize your ownership of your work. Remember, your music is intellectual property—one you inherently own upon creating. And when you sign away your copyright, either in part or in whole, you’re signing away your control of the music and potential royalties, and it’s difficult to undo.

If you’re a creator, make sure you and the co-writers you work with have an understanding of music copyright, and a general strategy for how you’re going to approach it, to avoid getting into sticky misunderstandings down the road. And if you have an opportunity to sign a publishing or label deal, make sure you clearly understand the terms—who owns your copyright, and who controls it. It’s not as simple as saying that owning 100% of everything is always what’s best for you. On the other hand, it’s definitely not true that any deal that comes your way is going to be advantageous for you. The bottom line is that you have to know what you’re getting into.

Do you have any questions on music copyright? What topics are you looking forward to us covering in Breaking Down the Biz? Let us know in the comments below.

breaking down the bizmusic business

Hollis Wong-Wear Hollis Wong-Wear is a musician and songwriter. Originally from the Bay Area, she reps Seattle and calls Los Angeles home. She is the lead singer of the electronic R&B trio The Flavr Blue, was GRAMMY nominated in 2014 for her collaborations with Macklemore and Ryan Lewis, and will be releasing her debut solo EP in the fall of 2019. 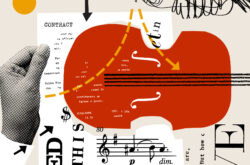 What to know before hiring a manager for your music

We created a roadmap to help you decide whether or not you need a manager, and what type of management is right for you and your career.